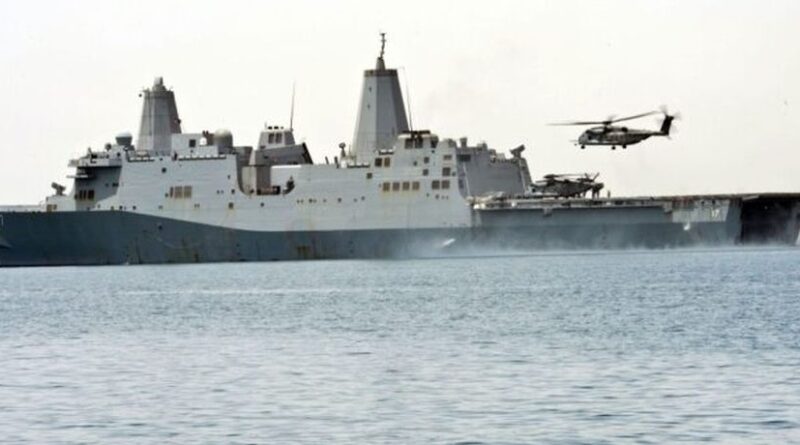 The first publicly acknowledged naval exercise between the United States, Israel and two Gulf Arab countries began on Wednesday, Nov. 10 in the Red Sea. Forces from the United Arab Emirates, Bahrain, Israel and the United States Naval Forces Central Command (NAVCENT) are focusing on maritime “visit, board, search and seizure tactics” and will “enhance interoperability” between the four participating navies, Vice Adm. Brad Cooper, commander of the US 5th Fleet and Combined Maritime Forces US Navy’s 5th Fleet, said in a statement on Thursday.

The US commander pointedly omitted reference to two other partners, Egypt and Saudi Arabia, whose naval and marine forces, DEBKAfile’s military sources disclose, are participating on the quiet in the drill Their leaders, President Abdel-Fatteh El-Sisi and Crown Prince Muhammed Bin Salman, prefer a low profile partly in respect of restraints at home.

Nevertheless, the multilateral command of the exercise has been set up at Berenice, the big new military base that Egypt established last year on its southern Red Sea shore, not far from Sudan. to secure free navigation through the Red Sea to and from the Suez Canal, as well as the ports of Eilat and Aqaba, and safeguard the vital oil and trading route between the region and Europe.

Vice Admi, Cooper stressed the exercise’s broad strategic context: Increased cooperation will keep the Red Sea safe and enhance regional stability, he said, “but not just the Red Sea, because we are dealing with Iranian terror in the region as a whole.”

The five-day exercise around the USS Portland amphibious cruiser will “enhance interoperability between participating forces’ maritime interdiction teams”, a US statement said. This ship carries 800 Marines and a fleet of helicopters for carrying them to targeted coasts. None of the other participants has publicly named the vessels or forces taking part in the exercise. However, Israeli, Bahraini and Emirati forces are expected to practice attempts to board and seize control of the Portland.

This exercise coincides with another drill, dubbed Zolfaqar-1400, that Iran launched over a stretch of coastal waters ranging rom the Strait of Hormuz on its southern off its southern shore up to the Indian Ocean.

The entire region is therefore buzzing with mock naval operations at a time of high suspense and leverage- building less than two weeks before Iran and the US restart negotiations in Vienna on Nov. 29 for a revamped nuclear deal. President Joe Biden has been quoted as saying that if talks fail, “other options” are open.

On Thursday, Nov. 11, two heavy US Air Force B-1b bombers and a KC-10 refueling plane were escorted though Israel airspace on their way to the Gulf by Israeli Air Force F-15 jets.

A second US-Israeli wargame is underway this week. It is led by two US units, 500 members of the US Marine Expeditionary Unit 11 and the M142 High Mobility Artillery Rocket System. They are focusing on simulated landings on an enemy shore and battles in built-up areas. Once again, the participating Israeli units are not named.

On Tuesday, IDF Chief of Staff Lt. Gen. Aviv Kohavi, commented: “The IDF can speed up its operational programs ready for taking on Iran and its nuclear threat, thanks to the approval of the budget for meeting this challenge.”

US-Israeli military cooperation has also been place on fast forward since Israel’s reassignment from the US European command and attachment to the Central Command which covers the Middle East with responsibility for preparing for a potential war with Iran. In the last week of October, the IDF attached a liaison officer to CENTCOM headquarters at Tampa, Florida for the task of strengthening coordination between the two armies. He was named only as Maj. Aleph.