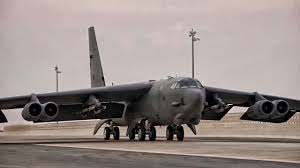 US B-52 Stratofortress bombers were on their way to the Middle East on Saturday, Nov. 21. Their mission: “To deter aggression and reassure allies”-  four days after Washington announced the drawdown of troops to 2,500 in Afghanistan  and 2,500 in Iraq by Jan. 15 of next year.

That date is significantly five days before the next US president takes office.

“The ability to quickly move forces into, out of and around the theater to seize, retain and exploit the initiative is key to deterring potential aggression,” said Lt. Gen. Greg Guillot, Air Force commander when the long range, heavy B-52 bombers took off from Minot Air Force Base in North Dakota.

The Central Command added that the mission demonstrated the military’s ability “to deploy airpower anywhere in the world on short notice.” The bombers are to be integrated with at least four other national defense elements.

The size of the bomber deployment is unclear, as is their destination. The B-52s were last deployed to the region last January, after a US drone attack over Baghdad killed Iran’s al Qods chief Qassem Soleimani. Six B-52s were then deployed to the Indian Ocean base at Diego Garcia to meet Iran’s threats of retaliation.

The Stratofortress provide muscle for what may be the Trump administration’s last diplomatic mission to the Middle East. Elliott Abrams, special US envoy on Iran, on Friday issued a blunt warning.to “Iran and its proxies” that “they would be sorry for any military or terrorist activities that kill Americans.” He spoke while accompanying US Secretary of State Mike Pompeo on what could be his last trip for touching base with key American allies, Israel, Saudi Arabia and the United Arab Emirates.

On Saturday, Pompeo continued to Doha, Qatar, to push forward Afghan government-Taliban talks on their outstanding issues and so speed up America’s troop withdrawal from its longest war.