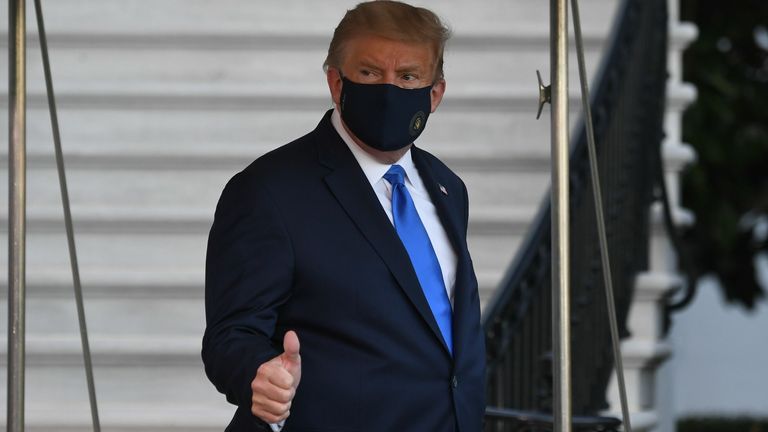 After a 30-minute delay, President Trump’s physician Dr. Sean Conley announced on Saturday, Oct. 3 that his patient is “doing very well… no oxygen today… no fever for 24 hours.” He stressed “We are extremely happy with his progress.” Trump was described as “working hard and walking around,” by Dr. Conley who answered reporters’ questions at the head of a large medical team which has been treating the president since he was flown to the Walter Reed military medical center on Friday after testing positive for coronavirus. His transfer to the hospital was termed a “precautionary measure.”
The physician asserted that no complications had been discovered in the president’ condition, he had been treated with the anti-virus drug remdesevir 40 hours earlier. On Thursday and Friday morning Trump had contracted a fever but been fever-free for 24 hours.
Asked why the First Lady Melania Trump, who likewise tested positive for covid-19, was not admitted to the hospital, Dr. Conley said she has not not shown any indication for any hospitalization and is in good health and recovering at home.

President Donald Trump was taken to hospital byy military helicopter Friday night, Oct. 2, 16 hours after he announced that he and the first lady had tested positive for covid 19. He is to remain at the Walter Reed National Military Medical Center “for several days.”

A Trump adviser said then that there is reason for concern about the President’s health. “This is serious,” he said. He went on to describe Trump as very tired, very fatigued and having some trouble breathing. He is being treated with remdesevir as well as the experimental drug cocktail, Regeneron’s REGN-COV2.

There has been no transfer of power to Vice President Mike Pence, said White House spokeswoman Alyssa Farah after Trump was flown to hospital. “The President is in charge,” she said. His campaign for re-election on Nov. 3 was meanwhile put on hold. Bill Stepien, Trump’s campaign manager, has tested positive for the virus.

Although updates were promised, it took 24 hours for the first word to be offered about Trump’s condition.

If his condition were to deteriorate at some point in the future he could temporarily transfer his powers to Vice President Mike Pence under the 25th Amendment. Letters would then be transmitted to the Speaker of the House and the president pro tempore of the Senate. Trump could reclaim those powers once he recovers.

As reported earlier, Trump walked on his own to the waiting helicopter showing no sign of illness. He gave a thumbs up but did not stop to talk. He and White House Chief of Staff Mark Meadows who accompanied him both wore black masks. The president was dressed in a blue suit with a blue tie. Trump landed at the hospital a short time later, saluting his military aides before climbing into his limousine for a brief ride to the hospital’s main building. His hand could be seen waving as he sped past assembled media.