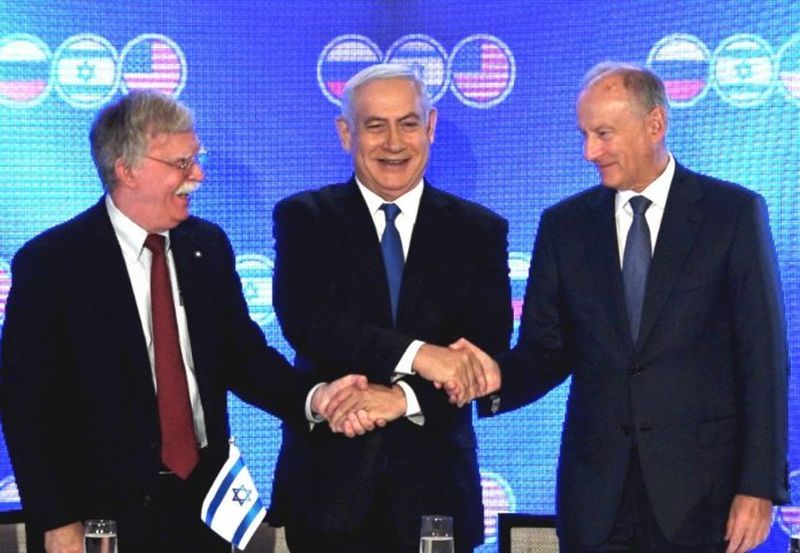 The Likud leader, Prime Minister Binyamin Netanyahu, is working overtime to get a meeting in Jerusalem of US, Russian and Israeli foreign and defense ministers off the ground in the run-up to Israel’s general election on Sept. 17. Under fierce collective opposition assault, he is hoping to face the Israel voter as the epitome of a high-flying global statesman, who strides easily between the White House and the Kremlin respected by both and stands head and shoulders above any rival contender for the premiership.

At the same time, he has never wavered year after year from a fundamental security goal that transcends partisan political calculations. The meeting he seeks to arrange must again focus on the removal of Iranian forces from Syria, Netanyahu stressed in a comment he made on Tuesday, Sept. 3. This goal is consistent with his government’s ongoing political and military moves vis-a-vis Iran, Syria and Hizballah.

In pursuit of his plans, DEBKA Weekly’s sources report the prime minister has been in frequent touch with Russian President Vladimir Putin’s bureau in an attempt to arrange a brief encounter with the president next week at the Black Sea resort of Sochi. Netanyahu will ask him to send Foreign Minister, Sergei Lavrov to Jerusalem to join his American and Israeli counterparts.

He wants the new parley to follow up on the trilateral meeting of security advisers that took place in Jerusalem on June 25. That meeting was significant in that it solidified a joint big-power bid to evict the Iranian military presence from Syrian soil.

Plenty has happened since that epic encounter. It took place against the background of a major US-Iran crisis in the Gulf, Iran was attacking Saudi and UAE oil tankers and facilities and had shot down a US drone; and Israeli forces were hammering Iranian and Hizballah targets in Syria at full blast, including a single operation that felled 10 command bases in a night.

In that period, Netanyahu had his work cut out to convince Washington and Moscow that, notwithstanding the extreme importance of US-Iran tensions in the Gulf, Iran’s military presence in Syria remained Israel’s top, abiding security concern and it also bore heavily on the US-Iran crisis in the Gulf region.

Since then, DEBKA Weekly’s military and intelligence sources have registered a mostly unnoticed Russian effort ordered by Putin to push Iranian and pro-Iranian armed forces out of their Syrian strongholds. The Russian president has four pressing motives for turning against his erstwhile ally:

1. He has bought Netanyahu’s argument that by this action he would establish a bridge towards mutual understanding and military cooperation with US President Donald Trump.

2. While US-Russian discord remains on such issues as Washington’s sanctions against Moscow and disarmament, especially with regard to intermediate-range nuclear missiles, Putin hopes to win a measure of American cooperation for preserving Russia’s gains from its military intervention in Syria. He holds this enhanced standing there as his most outstanding strategic attainment in the Middle East arena.

3. The Russian leader believes his friendly ties with the Israeli prime minister are a good stepping-stone for deals with Washington on these matters.

4. Signs of goodwill recently came from Trump. For instance, the US president tried to persuade French President Emmanuel Macron to invite Putin to the G-7 summit a Biarritz in the third week of August.

In Syria, meanwhile, Netanyahu is bucked up by Russian military commanders’ initiatives in recent weeks to drive Iranian Al Qods Brigades forces and the alien Shiite militias under their command to quit their strongholds inside an 80km strip around the Israeli border. By this action, Putin finally made good on the pledge he gave Trump when they met in Helsinki in July 2018. During the interim 14 months, this commitment was only partially upheld in different parts of Syria. The Russian president was obstructed partly by opposition inside his own administration.

a) Elements of the Russian defense ministry and military command in Syria objected to this move and often sidestepped the president’s instructions on various pretexts. Reluctant to confront these powerful elements, Putin refrained from forcing them to obey his will.

b) He also faced stiff opposition from Foreign Minister Lavrov and his staff.

c) Prime Minister Netanyahu told him that a limited Iranian armed forces withdrawal from the Israel border was not enough. They must leave all parts of Syria.

But the Russian president has apparently decided that the time has come to bring all his weight to bear on the heads of the defense and foreign ministries. They were instructed to drive Iranian forces and their minions out of all parts of Syria. He warned them that he would be watching progress in person. The requests Tehran filed with the Kremlin in recent weeks to post Iranian forces in locations to the west of the 80km limit were rejected out of hand, our sources reveal. And Moscow called off Russian-Iranian discussions scheduled to determine Iranian deployments at air and naval bases in Syria.

On Tuesday, Russian Defense Minister Sergei Shoigu announced that the Russian military will be upgrading the infrastructure of the Khmeimim Air Base and the repair facilities at the Tartous Naval Base used by Russian ships. Shoigu explained: “The tasks of protecting, preserving and maintaining the combat readiness of weapons and special equipment of the Russian military contingent [in Syria] are now in the forefront.” By this statement, Moscow emphasized Russia’s pre-eminent role in Syria and set aside the claim cherished for years by Tehran. This act also set the stage for the US, Russian and Israeli ministerial players to take their places.