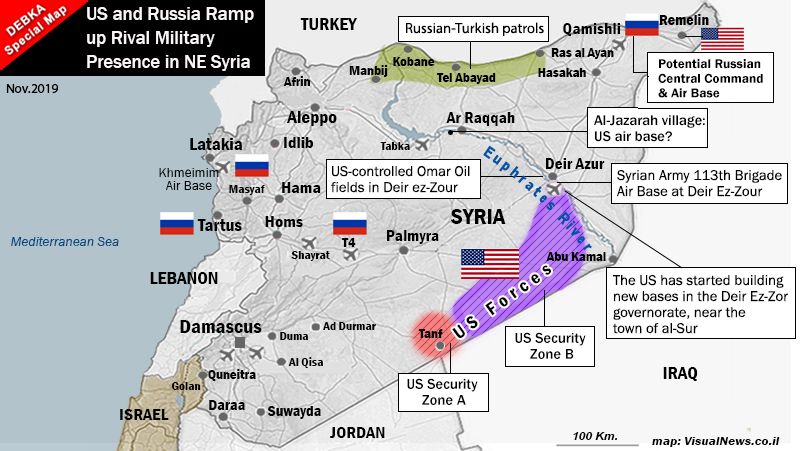 Ever since President Donald Trump announced he was pulling US troops out of Syria last March American forces have not only been digging in more firmly but expanding operations there. Indeed, according to DEBKA Weekly’s military sources, US bases are proliferating, including two or more new air bases. Revised US plans for eastern Syria are already in the works in three fields:

1. Whereas up until mid-October, the US Central Command (CENTCOM) estimated that the Russian army had no interest in taking over American bases in northeastern Syria after the US withdrawal, Moscow subsequently reversed those plans, Washington learned. A Russian lease for Qamishili airport is currently in advanced negotiation the Russian army and air force are holding with Syrian Kurdish leaders, with President Bashar Assad’s approval. (More about Russia’s plans in the next item.)

2. President Trump was finally persuaded to go back on his original decision to pull US troops out of Syria by arguments made by Republican Sen. Lindsey Graham against abandoning control of Syria’s oil and gas fields in eastern Syrian.

3. Contrary to the outcry against the Trump administration for abandoning the Kurdish allies to Turkey’s genocidal mercies, the US-allied Kurdish-led Syrian Democratic Forces (SDF) are more or less restored to the positions they held before the Turkish incursion. Most US troops are also still in place after some were withdrawn to western Iraq. And Turkish attacks have almost petered out, except for isolated shelling incidents. The only Turkish military presence in northern Syria today consists of joint patrols with Russian forces along two narrow border strips, which pose no threat to the Kurds.

On Wednesday, Nov. 6,the SDF commander, Mazloum Abdi, announced that full cooperation had been restored with the US army in Syria. As a result of series of meetings with Coalition leaders, “SDF is resuming its joint program of work with the Coalition to combat ISIS and secure the infrastructure of NE Syria

On Saturday, Nov. 2, shortly after SDF troops moved in, a convoy of US soldiers, advisers and officials arrived at the 113th Air Defense Brigade base in northern Deir Ez-Zour (see attached map). Once the largest base of the Syrian government’s air defense forces in northeastern Syria, it had held several Russian-produced SA-6 air defense systems and Shilka self-propelled radar-guided anti-aircraft weapons systems.

Judging from the equipment the US convoy brought along, as spotted by local watchers, the big Syrian 113th air defense facility base is about to morph into a new US air base whose perimeter will be contiguous with the permanent US special forces garrison at Al Tanf on the Syria-Iraq-Jordan border junction. The 55km x 55km security zone enclosing Al Tanf is about to be nearly doubled in area. (See attached map.)

That day, too, another US force arrived to boost the contingents stationed at Al-Jazarah, a village on the western outskirts of Raqqa, the town liberated from ISIS by the SDF.

On Nov. 1, forty US military vehicles arrived at Al Sabt military air base outside Sarin village near Kobane, a subdistrict of Aleppo.

On Oct. 31, some 200 US soldiers arrived at the Omar Oil Fields in the Deir ez-Zour Governorate with military tanks and vehicles. Contrary to statements from Washington, the influx of US reinforcements arriving in northeast Syria continues. It has moreover brought a US presence close to the Turkish border as a counterweight to the Russian forces conducting joint patrol with Turkish troops.

To find out what the Russians were up to, on Nov. 1, US military vehicles patrolled Qamishli city in the Kurdish Al-Hasakeh Governorate for around two hours.

To solidify the new Trump policy for a boosted US military presence in northeastern Syria, the White House and Pentagon are considering seeking approval from Congress. Up until recently, Washington and Moscow had been shuffling back and forth in northern Syria in a constantly changing dance – at times with, at times against, each other. Given Syria’s volatile landscape, it is hard to say how sustainable the deployments currently taking shape may be.