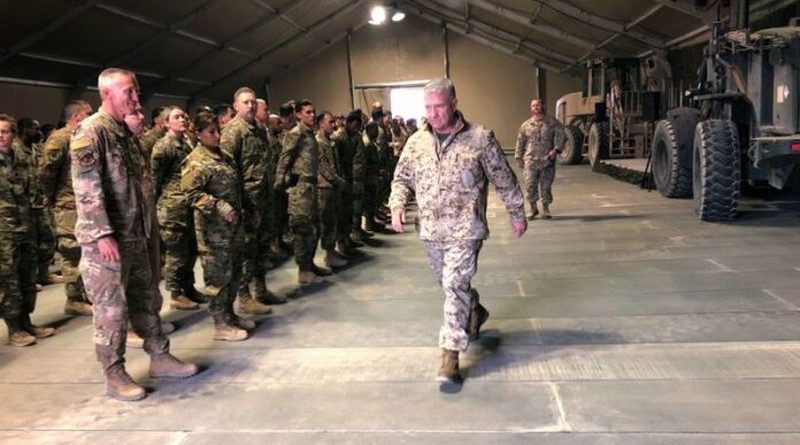 The highest-ranking US officer to visit Baghdad since the Qassem Soleimani assassination on Jan. 3, US Marine Gen. Frank McKenzie, head of CENTCOM, sought to crack two tough nuts when he dropped into the Iraqi capital on Feb. 3:

1. Iraq has denied the American military permission to bring over PAC-3 Patriot anti-missile systems for protecting US personnel against Iranian and pro-Iranian attacks.

2. The likelihood of the new Iraqi prime minister Mohammed Tawfiq Allawi acting to force US troops (some 6,000) to leave country as soon as he sets up a government. He has made this pledge to Iraq’s lawmakers and the protesters holding the country to siege for four months.

On Jan. 8, Iran launched more than a dozen ballistic missiles against two American bases, the big US Al-Asad airbase in western Iraqi and the second at Irbil international airport in Kurdistan. There were no American fatalities, but more than 50 troops suffered traumatic brain injuries at Al-Asad. While the bases were forewarned of the coming attacks some hours in advance and personnel and equipment suffered minimal damage, the base was short of adequate air defenses for intercepting the incoming projectiles.

To rectify that omission, the US army proposes to deploy at those bases MIM-104 Patriot missile defense systems, specifically the PAC-3 variant which is capable of intercepting and destroying the missiles launched by Iran in those attacks.

There is another priority consideration for fortifying US facilities in Iraq, The Patriots are not designed to counter the short-range Katyusha-type rocket artillery with which Iran’s proxy, the Iraqi Shiite Kataib Hezballah militia, has been harassing the US bases for months. US military planners are considering posting at all bases in Iraq an additional shield of mobile, short-range AN/TWO-1 Avenger air defense systems and possibly also the C-RAM, which is specifically designed to detect and destroy incoming short-range rockets as well as artillery and mortar rounds.

Since Iraq’s new prime minister has not yet formed a government, Gen. McKenzie was told that he would have to wait for answers about the new defensive systems’ deployment at US bases. However, according to DEBKA Weekly’s military and intelligence sources, the CENTCOM chief made it clear that the US armed forces did not propose to hang around and wait but would go ahead and deploy the systems regardless of Baghdad’s decision.

In any case, nothing good is expected from the new government in Baghdad. Allawi is a close buddy of Tehran’s Lebanese proxy chief, Hassan Nasrallah, secretary general of the Hizballah, whom Iran installed as its troubleshooter in Iraq to shore up Iranian influence in Baghdad against anti-Tehran elements staging protests on the country’s Shiite streets.

Two days after Soleimani was killed in a US air strike over Baghdad international airport, Iraq’s Shiite-dominated parliament passed a resolution demanding the expulsion of US forces from Iraq. That measure was not binding on the former government. Now, Washington sees signs that PM Allawi will make it one of his first priorities to follow orders from Tehran and Beirut and enact a binding parliament directive compelling the government to force American forces to leave Iraq.

The Americans know that neither the Iraqi government nor its national army is strong enough to carry this demand through, but it will certainly fuel the zeal of Iran’s proxy militias to escalate their attacks on American targets.