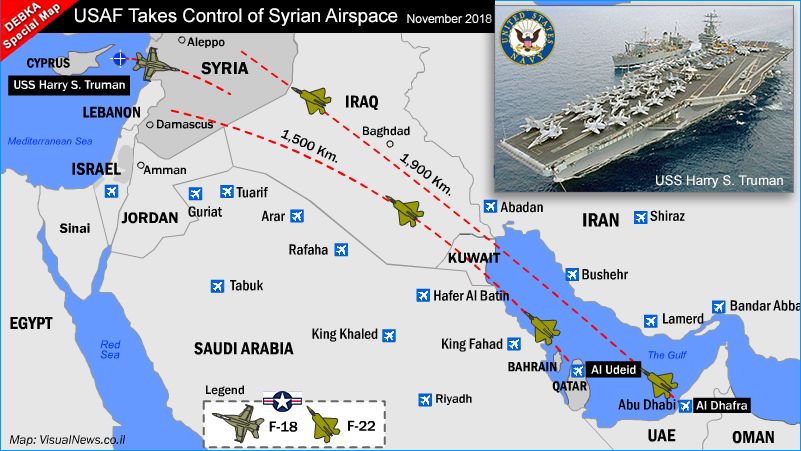 This new game changer in Syria, revealed here by DEBKAfile, provoked an exceptionally detailed threat from Tehran: “US bases in Afghanistan, the UAE and Qatar, and US aircraft carriers in the Gulf are within range of our missiles,” said Brig. Gen. Amirali Hajizadeh, head of the Iranian Revolutionary Guards’ airspace division, on Wednesday, Nov. 21. “We can hit them if they (Americans) make a move. Our land-to-sea missiles have a range of 700 km (450 miles) … and the US aircraft carriers are our targets.” he said.
Iran’s airspace chief was responding to the abrupt change in the skies over Syria. For the past week, the: US Air Force has kept F-22 stealth planes and F/A 18F Super Hornet fighters flying over Syria around the clock. Gen. Hajizadeh knew exactly where they were coming from – the US Al Udeid Air Base in Qatar and the US Al Dhafra Air Base in the UAE. Why he slipped the Kandahar base into his list is a mystery because none of the USAF planes over Syria come from there. The USS Harry Truman Carrier Strike Group is another matter, since some of the US fighter bombers circling over Syria come from its decks. This five-ship strike group reached Syrian waters late last week. They also had cruise missiles aboard.
DEBKAfile’s military sources report that these US overflights are taking place without interruption: as one group flies back to base, another takes its place. Their constant presence in Syrian air space has chased all other warplanes, especially those of Russia and Syria, out of the sky. US pilots also report that the S-300 air defense systems, which the Russians began importing to Syria in October, are not operational and are unlikely to be before January.

This is what Pentagon spokesman Eric Pahon was talking about on Tuesday, Nov. 20, when he said: “Russia’s S-300 air defense systems in Syria have no impact on United States’ operations in the country.” He also aimed a warning at Moscow: “Any additional arms sent into Syria only serves to escalate the situation at this point.”
Is this a window of opportunity?
According to an exclusive report reaching our military sources, unidentified aircraft attacked an Iranian target in Syria on Monday, Nov. 19. This was not a major operation and the target was small. All the same, it was the second attack on an Iranian site in Syria since Israel discontinued its aerial attacks in the second half of September. The first, on Oct. 23, appears to have been carried out by unidentified missiles against the Damascus region. After the air strike, Washington hastened to send out quiet messages that the USAF was not involved. However, so long as the Russian S-300s are non-operational and the US Air Force provides an umbrella, Israel is offered a window of opportunity for resuming its assaults on Iran’s presence in, and arms deliveries, to Syria. There is no knowing how long that window will stay open.