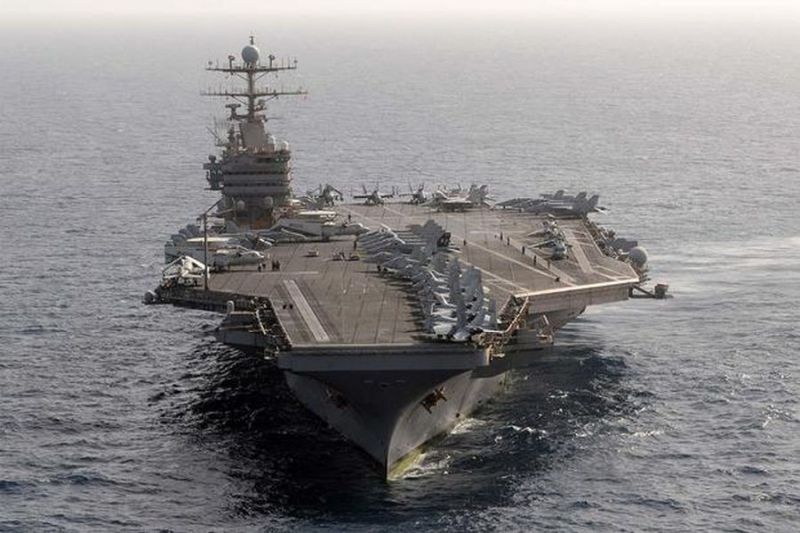 The pivotal date was May 2, when the next round of US sanctions was clamped down on Iran’s oil sales. It was then that the countdown began for the onset of open clashes involving US and Israel, on one side, and Iran, Hizballah and Syria, on the other. All five players are getting set for an outbreak of overt hostilities with steps outlined here by DEBKA Weekly:

• On the orders of President Donald Trump, Iran’s Islamic Revolutionary Guards Corps (IRGC), the prop of the Islamic regime, was designated a foreign terrorist organization, including its Al Qods Force.

• The USS Abraham Lincoln nuclear carrier with its 10-vessel strike force was deployed on April 24 opposite the Syrian coast. US Navy sources reported that Jon Huntsman, US ambassador to Moscow, was posted on the command bridge from which he made this comment: “When you have 200,000 tons of diplomacy that is cruising in the Mediterranean, this is forward-operating diplomacy – nothing else need be said.”

It is unheard of, even during the darkest days of the US-Soviet cold war, for a senior diplomatic envoy to join a naval-air strike force as a challenge to an enemy. Huntsman, having delivered his message, disembarked, but the carrier remains in position.

• US bases, troops and facilities in the Middle East have been placed on high alert. They include the 30 bases in Iraq with 5,500 military personnel and the facilities in Syria where 2.200 troops are deployed.

• Also on high alert are US air defense systems across the region in case of Iran or its allies resorting to missile or explosive UAV attacks.

• On 15 April, CENTCOM deployed F-35A Lightening IIs to Al Dhafra Air Base in the UAE, the first deployment of the fifth-generation multirole aircraft to the Persian Gulf.

• All the IDF units posted along Israel’s northern borders with Syria and Lebanon – and its southwest region adjoining the Gaza Strip – are on high alert.

• On Tuesday, April 30, the IDF upgraded all air defense systems to war preparedness level. Iron Dome batteries were spread out across the northern, central and southern districts, on the strength of an intelligence assessment that the long-range rocket fired on Monday, April 29 from the Gaza Strip over the Mediterranean opposite Israel’s southern port of Ashdod, carried an Iranian threat. It was feared that Tehran may opt to avenge itself on US oil sanctions by sending its terrorist surrogates, Hizballah, Hamas or Islamic Jihad, to blockade Israel’s Mediterranean ports.

• The appointment of Maj.-Gen. Hossein Salami as new Revolutionary Guards commander on April 21 – the very same day that Secretary of State Mike Pompeo announced the lifting of waivers for eight importers of Iranian oil – signaled the activation of an Iranian plan of retaliation. The new commander, who is frankly spoiling for action, stands ready for Ayatollah Ali Khamenei’s order to spring into action.

• For some weeks, Iranian officials have warned that Tehran will formally withdraw from the JCPOA (the nuclear accord Iran signed with six world nations in 2015) – which President Donald Trump quit last May This means Iran will go back to the enrichment of uranium to weapons-grade levels for the purpose of setting in a nuclear arsenal.

• Iranian and Hizballah intelligence watchers believe they have found a US-Israeli plan of operation for wielding the pro-American Syrian Democratic Forces (SDF) against Iranian targets in Syria, in the event of a war escalation.

They are reporting that “American military advisers have been given orders to get ready to strike Iranian forces in Syria with unmanned drones, while SDF militias embark on a parallel campaign of harassment against Syrian army and Iranian-allied positions at Mayadeen and the border city of Abu Kamal.” This report goes on to say that the SDF and the armed militias affiliated to the Deir Ez-Zour Military Council and the Revolution Commandos are preparing “to stage a wide-scale operation at Abu Kamal, with large quantities of high-quality weapons provided by the United States.”

• The Iranians also report that large convoys of US military trucks have been moving from western Iraq into Syria loaded with heavy weapons, including anti-tank missiles and ammunition.

• The forces commanded by Iran’s al Qods Brigades, especially the Iraqi Shiite PMU (Popular Mobilization Units), are gearing up for the critical battle for control of the main highway link from Baghdad to Damascus. They calculate that US forces, with Israeli military or air force support, will attempt to gain control of eastern Syria and western Iraq by seizing control of segments of this strategic highway.

• Lebanon is in the grip of war fever ever since Hizballah’s adherents began quoting senior officials of their organization as predicting a June war with Israel.

• “Mobilizing all popular forces and the alliance of resistance in advance of a possible military clash with the Zionist enemy is being considered,” Syria’s Deputy Speaker Najdat Anzour recently told the Syrian daily al-Watan.

• In the opinion of Hizballah and Syrian analysts, an Israel-Hizballah clash of arms in Lebanon would quickly spill over into the western Syrian border areas controlled by the Lebanese organization. It is there, in a cluster of bases, that Hizballah maintains the surface missiles held ready to launch against Israel in the event of a war escalation. Those bases, which hold some 5,000 troops, have been placed on high alert.

• In the past month, Hizballah performed a rapid reshuffle in the command structure of its combat units in central and southern Lebanon. Most of the veteran commanders were replaced with younger men and the units reconstructed so as to be ready to snap into operation at once, in the event of a surprise attack by the US or Israel.

• Nawaf Al-Moussawi, a Hizballah lawmaker in the Lebanese parliament, was recently quoted as predicting that on the “historic day of May 3,” Iran will face two options: to let the US starve 70 million Iranians, and so bring down the regime from within – which Iran’s leaders will in no way allow to happen; or to go to war with the US, Israel and their allies in the region. Therefore, a military response is inevitable whatever the outcome.”