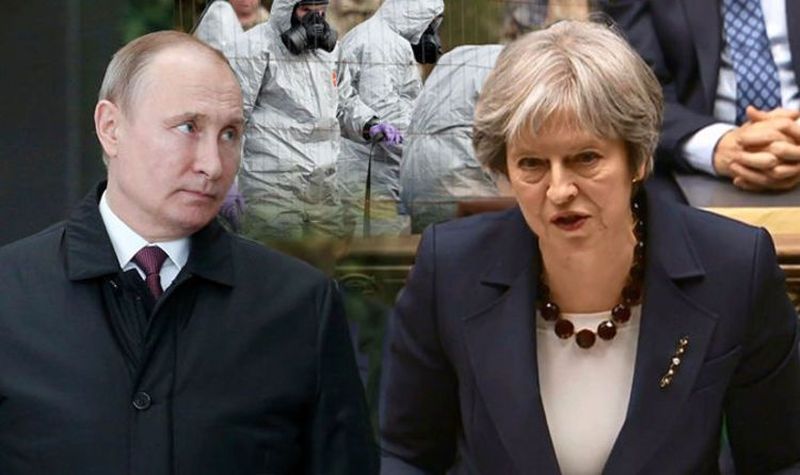 UK Prime Minister Theresa May was cheered in Parliament on Wednesday, March 14, when she announced in ringing tones a series of sanctions against Russia over the nerve agent poisoning of the still active double spy Sergey Viktorovich Skripal, 66, and his daughter Yulia, 33, in Salisbury on March 4. Her allegation of Russian culpability caught Russian President Vladimir Putin at a delicate moment, five days before his almost certain reelection for a fourth term on Sunday.

Although the war May declared on Moscow may drag on for months, there is not much she can do if he brings up his heavy guns. In the hope of avoiding this, she kept her sanctions down to the expulsion of 23 Russian diplomats labeled as “undeclared agents,” stepped up inspections of packages and materials imported from Russia and refrained from the painful step of boycotting the World Football Finals in Moscow between June 14 and July 15, only announcing that no royals would attend.

But Putin can’t afford to hold silent when he is smeared across world television screens as guilty of waging chemical warfare against a European nation. His victory at the polls is bound to be marred by his being painted in the same colors as the North Korean dictator Kim Jong-un who notoriously had his half-brother murdered at Kuala Lumpur airport with VX, a chemical warfare agent banned by the UN.

May most likely decided to go public with her allegations after the British secret service reported they had run to earth Russian agents suspected of conducting the assassination attempts against the Skripals. That said, they can’t be sure beyond all reasonable doubt that they have identified the right culprits, although in a past case, they claimed to have successfully proved that two KGB agents were responsible for poisoning former Russian secret agent Alexander Litvinenko with radioactive polonium-210 in 2006. May’s case against Moscow is still far from watertight, although it is suggestively circumstantial.

London is the adopted home ground of three of the biggest expatriate Russian communities. These groups are divided by major differences. One is composed of oligarchs, some of them are close cronies of President Putin, like Roman Abramovich, Alisher Usmanov and Oleg Deripaska and the lesser known Eugene Shvidler, Vladimir Makhlai and Yelena Baturina. Long accounts have been published about the sources of their wealth, but the general consensus is that their friendship with Vladimir Putin was largely instrumental in its accumulation, and a portion of their assets in British banks is held at his disposal.

The second Russian community based in London is composed largely of Putin’s opponents in exile. One of its leaders was Boris Berezovsky, who was found hanged in his home outside London in March 2013, after losing a three billion-pound lawsuit against Abramovich over the ownership of the Sibneft oil company. His right hand man Nikolai Glushkov, 68, former boss of the Russian state airline Aeroflot, was found dead with strangulation marks on his neck at his home in London eight days after the attack on the Skripals.

The third group is the smallest and consists of former Russian secret agents, some of whom are still active. Many may be known to the British MI6 and MI5 clandestine services, although not necessarily who they are working for or what they are up to at any given time. Some of them no doubt make extra bucks by serving rivals in the groups of pro-Putin and anti-Putin oligarchs.

The UK-Russian war is still low key sanctions-wise. The British prime minister could escalate it substantially by freezing or otherwise interfering with Russian funds and assets in the UK, as some parts of the British public are demanding in retaliation for the poisoning. However, in an economic war, Moscow would have the upper hand. It would find Britain vulnerable and isolated by Brexit and struggling for exit terms with the European Union. London can’t afford to lose Russia as an export market at this time. Putin might hit back by nationalizing Rosneft in which British petroleum owns a 20 percent stake.

US backing for a tough British stance against Vladimir Putin is far from explicit, any more than Europe’s. Under heavy pressure to criticize Putin, President Donald Trump allowed a White House written statement to be issued on March 15, 10 days after the poisoning attack. It said that Russia “disregards the international rules-based order, undermines the sovereignty and security of countries worldwide…The United States is working together with our allies and partners to ensure that this kind of abhorrent attack does not happen again.” It was issued after UN Ambassador Nikki Haley unequivocally pointed the finger at Moscow, saying: “If we don’t act now, Salisbury won’t be the last place where chemical weapons are used.”

But still no direct criticism from president Trump in person, although he agreed with May in a telephone call that Russia should provide “unambiguous answers.” German Chancellor Angela Merkel said: “The European Union would present a common stance over the nerve agent attack in England, but we must keep talking to Moscow.”

Finally, on Thursday, March 15, the leaders of Britain, the US, Germany and France got together for a joint statement strongly condemning the Salisbury nerve agent attack as “an assault on UK sovereignty” and saying it is highly likely that Russia was behind it.

The statement says: “This use of a military-grade nerve agent, of a type developed by Russia, constitutes the first offensive use of a nerve agent in Europe since the second world war.”

In their strong condemnation, Britain’s key allies still shied away from explicitly nailing Russia for this heinous attack.

In Moscow, the Russian foreign ministry spokesperson Maria Zakharova called an earlier press conference to call Theresa May’s allegations “insane” and promise a response “very soon” – at the very least, tit-for-tat expulsions of British diplomats. She again complained of British non-cooperation in meeting the Russian government’s demand, supported by international law, for access to the nerve agent used in the attack of the former spy for establishing the facts of the case.

The Russians claim consistently that, when the Soviet Union broke up, they ordered the rulers of the Asian republics where the chemical weapons plants were located to destroy all their stockpiles, and they are not responsible if some of the deadly chemicals reached the wrong hands, any more than another of their products, the AK-47 Kalashnikov.