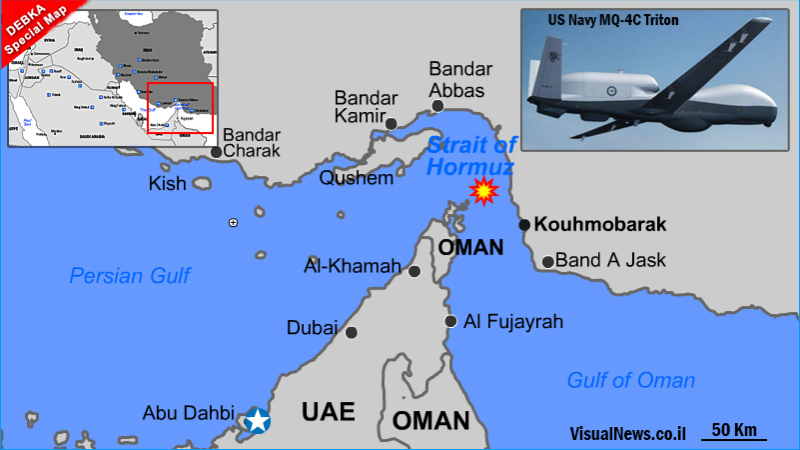 Iran’s intent after downing a US Navy drone over the Strait of Hormuz on Thursday, June 20 was clear: more escalation.America’s next move was less knowable. US President Donald Trump tweeted that Iran had made “a very big mistake.” Asked about a possible strike on Iran, he said: “You’ll soon find out.” But he was conspicuously absent from the special White House meeting later that day to determine America’s response to what US officials called a “provocative attack” on the US Navy MQ-4C Triton drone when it was 20 miles from the shoreline in international waters.

The president’s senior advisers led by Secretary of State Mike Pompeo and national security adviser John Bolton were of one mind that America could no longer hold back from hitting Iran, else its leaders would simply escalate the aggression against the US and its Middle East allies. But by leaving his advisers to determine how the US should react, Trump kept all the options squarely in his hands and maintained the last word on whether or not to clothe America’s response in direct military form.

Iran’s supreme leader Ayatollah Ali Khamenei has no such qualms. He seems to feel that he can continue to get away with raising the stakes in the confrontation with America. And indeed, according to DEBKA Weekly’s sources, the regime’s next plan is to start directly striking US military bases and step up Iranian and proxy attacks on Saudi Arabia and Israel.

It now appears that the Revolutionary Guards missile attack on the US Navy drone on Thursday was Khamenei’s answer to the message Pompeo relayed to Tehran when he visited Baghdad last month: Tell them, he said, that a single American fatality would prompt the United States to hit back. The regime heeded that threat to the letter by attacking an unmanned aircraft, but it also carried a resolute message back to Washington: The Islamic republic of Iran is responsible for security in the Persian Gulf and the Strait of Hormuz – not US CENTCOM, as American contends.

Tehran was also throwing back in his face Trump’s contemptuous assertion to Time Magazine that its June 13 attack on Gulf oil tankers was “very minor.”

Taking the opportunity of the tension to shore up popular support for the regime, the Islamic regime called a snap civil defense drill on Thursday, simulating air and missile attacks on Tehran and a nuclear strike. Its objective was described as testing the readiness of Iran’s civil defense systems for “possible mass bombing” and “radiation exposure events” that would call for the evacuation of civilians and steps for controlling outbreaks of mass panic. Suddenly patrolling the streets of Tehran on Thursday were troops and vehicles of the Revolutionary Guards special units that were trained to deal with chemical and radiation injuries.

Our sources reveal that, on the heels of the intelligence received in Washington of an imminent Iranian assault on a major Saudi oil facility (see a separate article on this), subsequent input discloses parallel Iranian plans to attack Israel or an Israeli target. This new intelligence prompted Prime Minister and Defense Minister Binyamin Netanyahu to call a special security cabinet meeting on Wednesday to discuss the ramifications of such an attack and how Israel would respond.

Shortly before publication, DEBKA Weekly was able to sum up the current military standoff in the Middle East in a nutshell:

• US CENTCOM forces are on standby to strike Revolutionary Guards in the Gulf region.

• All US military personnel in the Mid-East, especially Iraq and Syria, have been placed on combat preparedness.

• Saudi and UAE forces are on high alert for Iranian and proxy military or terrorist attacks.

• Israel’s armed forces are on the ready, especially at focal points on its borders with Syria and Lebanon, for a potential large-scale terrorist operation by Iranian, Hizballah or pro-Iranian Iraqi Shiite militia forces.