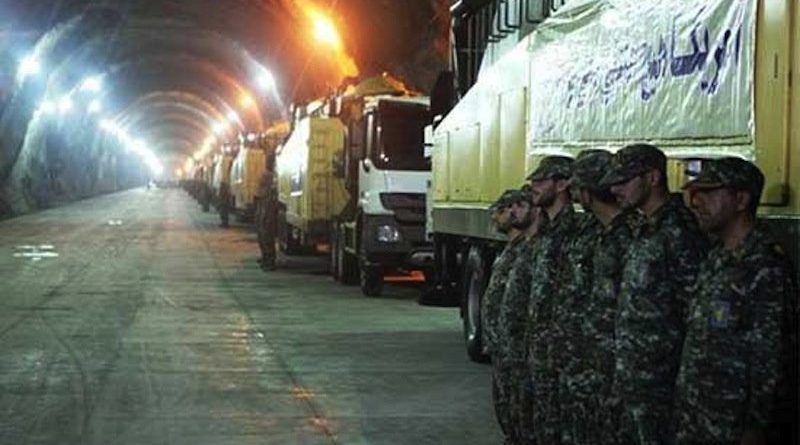 Tehran is ratcheting up its nuclear upgrades to generate a crisis for pressuring the new Biden administration into a hasty deal “without revisions.” Its foreign Minister Javad Zarif rejected president elect Joe Biden’s offer to rejoin the 2015 nuclear pact (JCPOA) with Iran, abandoned in 2018 by Donald Trump, by rejecting its proviso – strict compliance with its terms. However, strict compliance on America’s part is exactly what Iran is after, namely, a verbatim replay of the original 2015 document based on the Obama administration’s strategy, which omitted reference to Iran’s non-nuclear threats to regional stability, such as missiles.

After all, Biden as vice president was part of this strategy. The hardlines in Tehran, who are gaining against the pro-diplomacy faction of President Hassan Rouhani and Zarif, were encouraged to believe Biden would stay in line from a comment he made in an interview on Dec. 1,

While offering to rejoin the nuclear accord with Iran, Biden added: “Look, there’s a lot of talk about precision missiles and all range of other things that are destabilizing the region,” but the fact is, “the best way to achieve getting some stability in the region” is to deal “with the nuclear program.”

Since 2015, Iran, free of restraints, has enhanced its missiles’ lethality, range and accuracy, transforming them into a major tool for asserting its dominance in the region and handing them out to proxies, especially the Lebanese Hizballah, to carry on the work of regional disruption of US and its regional allies’ interests. The Islamic Republic posted its most brilliant brain, Mohsen Fakhrizadeh, (who was assassinated last month) at the top of not one – but two – primary national projects: its nuclear weapons program and also its missile development, a pointer to the importance Iran attaches to both.

Last year, DEBKAfile quoted US intelligence experts as revealing that the  Sept. 14 destruction of Saudi oil refineries at Abqaiq, the largest in the world, and its main oilfield was caused by high-precision Iranian cruise missiles launched from Iraq – not Houthi drones as widely reported. The kingdom’s oil output was slashed by half in minutes. On Nov. 22, 2020, a single long-range cruise missile fired by Iran’s Yemen proxy, the Houthis, attacked an Aramco facility near Jeddah. In between those attacks – and since – Houthi missiles and drones supplied by Tehran consistently plague neighboring Saudi Arabia.

The Saudis and their Gulf allies are all insisting on the Biden administration broadening any revived nuclear deal to include Iran’s missile arsenal and other tools for destabilizing their regimes.

The first two, unveiled on Aug. 20, were named in honor of Al Qods chief Qasem Soleimani and Iraqi militia leader Abu Mahdi al-Muhandis both of whom were killed by a US drone strike in January 2020 at Baghdad airport. Haj Qasem is a surface-to-surface ballistic missile with a solid-fuel rocket motor and a range of 1,400 kilometers. Haj Abu Mahdi claims a range of 100 kilometers. Photos seem to depict the latter being launched from a truck-mounted container, suggesting an additional coastal defense role against enemy ships. They were unveiled shortly after Iran released footage of a test of what was purported to be a newer version of its medium-range Khorramshahr surface-to-surface ballistic missile. It is claimed to have a range around 2,000 kilometers and carry multiple warheads, although the latter feature hasn’t yet been independently verified.

The Iranian Ra’ad (not to be confused with the Pakistani Ra’ad) is an anti-ship missile of Chinese origin, which entered service in 2007 and has a reported range of 350 kilometers.

Iran’s enhanced missile arsenal has made it a much greater menace to the US presence in the region than it was in 2015. Its ballistic missiles are increasingly dug-in and dispersed and capable of being transported in disguise as civilian trucks.  Iran has the technical know-how and industrial base to quickly develop and field ballistic missiles with ranges well exceeding 2,000 kilometers.

Iran is also likely to unveil soon a range of supersonic anti-ship and land-attack cruise missiles which will make countering Iranian low-flying cruise missiles even more difficult. Iran has transferred both critical missile hardware and know-how to its allies and proxies whenever possible.
Its space program has strong military aspects. At some point, Iran is expected to test long range ICBM-ready solid fuel rockets under the guise of space launch vehicles.

Iran’s supreme leader Ali Khamenei made it clear on Nov.24 that curtailment of its missile program will never be allowed.

On Dec. 3, Iran’s parliament passed a law ordering an immediate ramping up of its enrichment of uranium to 20pc levels closer to weapons-grade fuel and halting international inspections unless US sanctions are lifted by February.

Parliamentary measures are not binding on Khamenei or his regime. However, their enactment, plus the IAEA’s report that Iran is planning to install three clusters of advanced IR-2m centrifuges in the underground plant at Natanz, are designed to simulate a climate of crisis for bringing the incoming US president under presssure..