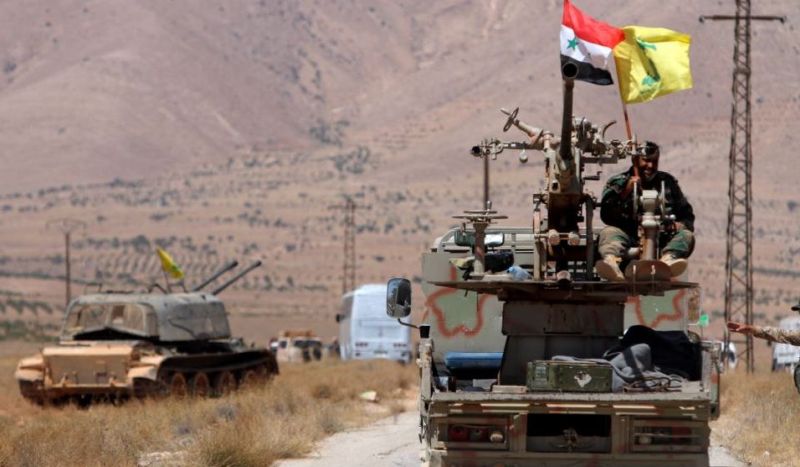 The two camps bracing for a major contest in Syria have chosen contrasting tactics for their preparations. While the Trump administration takes time to muster enough strength for a sustained campaign, DEBKA Weekly’s military and intelligence sources offer an exclusive rundown on the preparations afoot inside Syria as they stood on Thursday evening, April 12, before this issue closed.

The Syrian ruler, Bashar Assad, left his Qasioun Palace north of Damascus on Tuesday, April 10. His wife and children departed last week. Their present location is a closely-held secret, unbeknownst even to leading intelligence services. Rumors that they have gone to ground in Tehran or Lebanon are unfounded. It is generally assumed that they are in a prepared hideout somewhere in Syria and that, since Assad is bound to stay in touch with the Syrian, Russian and Iranian command centers running the war, its location will be revealed at some point, even if he uses couriers.

The Syrian army, the Iranian military and Hizballah have chosen to mix their troops inside civilian populations ahead of the war crisis.

The military and intelligence command centers in Damascus have emptied out, including the Syrian general command, except for a few sentries. The only effective force remaining in the capital are air defense units beefed up by Russian anti-air missiles and launchers.

The Syrian army’s 4th Armored Division, an elite unit for guarding the Syrian regime from internal and external threat, was evacuated with its commander, Bashar’s brother Maher Assad, from its bases around Damascus. They were scattered through the surrounding villages and towns in small knots of four to five men in each a home. The Republican Guards’ three brigades were similarly dispersed.

Assad went to great lengths to conceal his most effective special tank unit, the Tiger Forces, which is equipped with Russian T-90 tanks and spearheaded the successful battles in East Ghouta. Fearing this unit would be a prime target for the incoming US-French-British assault, he broke it up into small units and planted them along with two or three tanks in out-of-the way storehouses and remote wadis.

Otherwise, tanks, artillery and other heavy gear have been stored in schools, mosques, halls, private parking lots and other roofed public buildings.

The main Syrian air bases are now deserted. They include the Al-Nasiriyah military air base outside Damascus, the Mezzeh Military Airport – a section of Damascus international airport, Marj al-Sultan, 15km to the east which serves Syria’s main warplane and helicopter fleets, and Al Dumeir, 40km north east of Damascus, whence the helicopters carrying poison gas bombed Douma on April 7. This alleged crime provided President Donald Trump with the casus belli for an operation to punish Assad.

Aircraft and flight personnel were also evacuated from the Sayqal Military Air base near the capital and from Shayrat air base near Homs. The latter was struck by US Tomahawks last year after a previous Syrian chemical attack on civilians.

The T-4, or Tiyas Military airbase, which was shared by Syrian, Russian and Iranian air forces, stands empty since Israel’s missile attack on April 9, which took the lives of seven Revolutionary Guards officers. The Menagh military air base outside Aleppo is also derelict.

Disposing of his air fleet presented the Syrian ruler with a special challenge. He decided to move valuable strike planes, such as Mig-29s and Sokhoi 24s, out of their western and central hangars to the far northernmost corner of the country on the Iraqi border, hoping they will be out of reach of US cruise missiles.

The pro-Iranian Hizballah and Shiite militias under Revolutionary Guard commanders have also scarpered from the incoming danger. According to our sources, Hizballah’s elite Radwan and other special forces have fled to Yabroud in the Qalamoun mountains close to the Lebanese border. It is there that Hizballah and its Iranian bosses spent the last year building underground bunkers for housing surface missiles, armored vehicles and artillery. Some of those bunkers are fortified against missile and air attack.

At the same time, our military sources report that Iran and Hizballah have left a substantial force on the ready in the Deir ez-Zour region of southeastern Syria. It is armed with missile and heavy artillery and under orders to go hard for the US bases clustered in the Kurdish regions of Hasakeh, Qamishli, Tabaka and Rmeilan, the moment that US, French and British forces embark on their offensive.

The Russian military command has confined its personnel in the three bases it maintains in Syria, where they are protected by advanced S-400 and S-300 air defense missile systems. However, all 12 Russian warships anchored at Tartous port have sailed out to sea.

DEBKA Weekly’s sources report that the delay in President Trump’s decision to launch the Syrian campaign before mustering sufficient strength for a sustained effort gave Syria, Iran and Hizballah time to whisk their military personnel out of danger and prepare a counteroffensive. But it also accounted for the White House decision to take the time needed for a strategic, well-prepared campaign to unfold over a period of time.