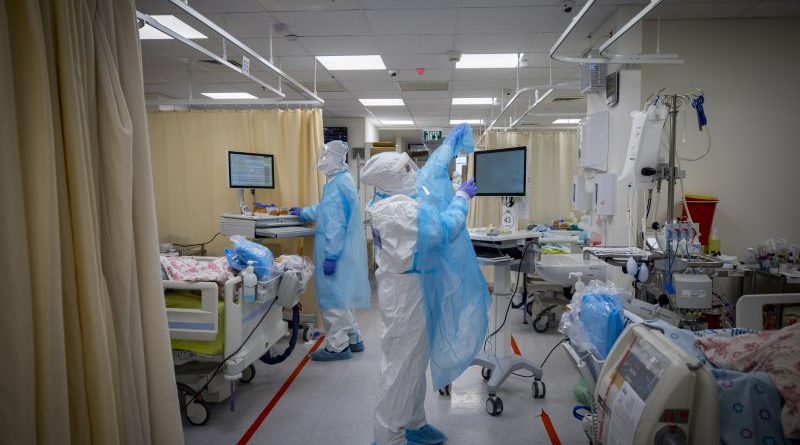 Not science but maybe common sense, says the American expert Dr. Antony Fauci. In Israel, the rapid spread of the “British variant” of covid is held responsible for the persistently high level of infection, despite 20 days of lockdown and nearly three million vaccinations. And not only in Israel. The UK variant is reportedly by WHO to be rampant in 70 countries and the South African strain in 30. The Brazilian strain is creeping up behind. And who knows how many more covid variants are waiting to pounce?

Dr. Fauci says that wearing two masks is better than one for warding of coronavirus. “If you have a physical covering with one layer, you put another layer on, it just makes common sense that it likely would be more effective,” said Fauci, “And that’s the reason why you see people either double masking or doing a version of an N95.”

On Wednesday, Jan. 27, Pfizer and Moderna, the two prominent producers of covid vaccines, said they were stepping into the breach and working on providing a third dose for extra security against the swarming variants. It would be added to the regular two doses, although they appear so far to be effective.

More than half of the coronavirus cases in Israel are currently identified as the UK variant. The Ministry of Health reported that he South African virus has already been identified in 30 cases – three more on Wednesday.
The high-speed infection of these strains has smashed the ministry’s models on which its plan to start releasing the country from tight lockdown next Monday, Feb. 1, was based. New cases on Tuesday dipped slightly to 7,752 in 24 hours. However, 1,207 seriously ill patients are in hospital with 324 on ventilators. And 48 deaths ramped up the total since the onset of the pandemic a year ago to 4,539.

Contagion albeit in milder form is encroaching on children, a group up to 16 that was excluded from the trials by the vaccine manufacturers. Among the many questions still to be addressed is this: Do the children face greater threat of infection in controlled schoolrooms or at home?

Israel is heading for another week of countrywide lockdown, meaning that plans to reopen pre-schools and low grades and street shops on Feb. 1 would be shelved, at enormous financial cost and human suffering. But PM Binyamin Netanyahu endorses the ministry’s demand to extend the shutdown as unavoidable. For how long? That depends on how the infection figures go, he says.

At least two health experts are certain that the massive vaccination drive and three weeks of lockdown will bring the figures down, although at a pace much slower than predicted and one that is taxing hospital coronavirus and emergency wards beyond their limits. Rows of Magen David ambulances were seen this week waiting for hours outside a Jerusalem hospital. They were unable to unload patients because no beds were available in the crowded wards.

Meanwhile, Kahol Lavan, an equal partner with the prime minister’s Likud in the government coalition, threatens to block his initiative to extend the lockdown. Defense Minister Benny Gantz’s party has presented an ultimatum: Approval of the extended lockdown at a cabinet session on Thursday on condition that, by then, the Knesset enacts a bill doubling the fines levied on ultra-Orthodox (haredi) schools and yeshivot that persist in operating in violation of the rules. Likud accuses Kahol Lavan of playing party politics for the March election.
Violent clashes have erupted in the past week between haredi students and police who tried to enforce the rules in several communities. The move to double their fines has their leaders up in arms.