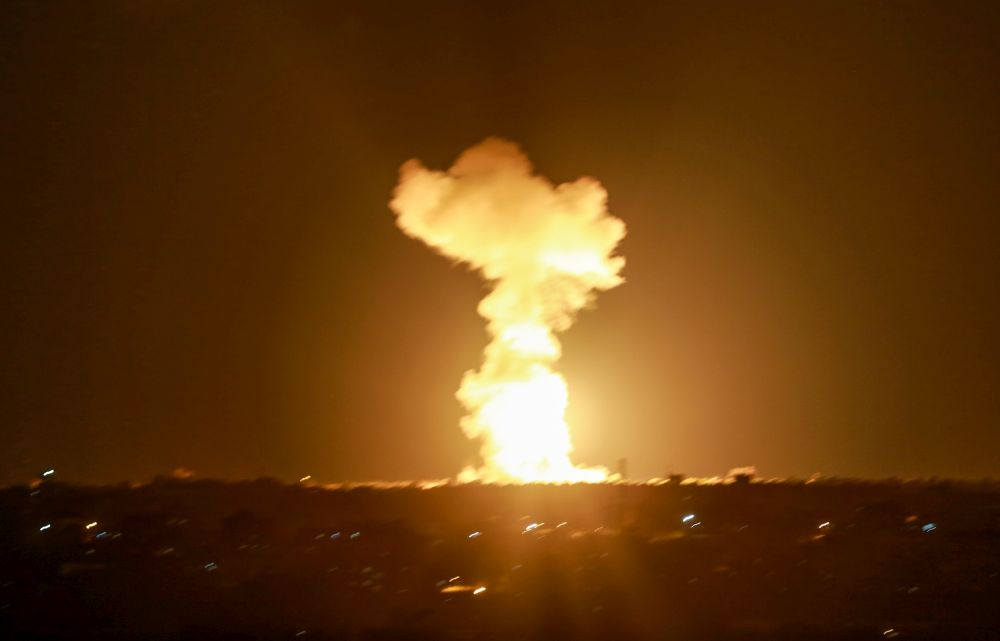 Israel’s deterrent strength is on the line after the Palestinian Hamas fired more than 400 rockets in 5 and-a-half hours on Monday, Nov. 12. After their massive barrage, Hamas and its terrorist allies threatened to expand their targets beyond the South if the Israel air force on missions in Gaza Monday night goes beyond its routine tit-for-tat reprisals against empty buildings in the Gaza Strip.

An escalation of violence is therefore unavoidable in the next hours.  It is up to the IDF to switch its tactics to attacks that cause the Palestinian terrorists real pain. Monday night, the IDF dropped small rockets on the Hamas Al Aqsa TV channel building in Gaza City as a warning of the coming bombardment. The building was evacuated before it was demolished and their were no casualties. Israeli jets and drones went on to strike more buildings in Gaza City and Rafah, still within the usual norms, while Hamas confined its rocket launches to the South, although an anti-tank missile on an Israeli bus in the afternoon occurred minutes after 50 soldiers debarked, and could have caused a massacre. One of the soldiers was critically hurt.

Prime Minister Binyamin Netanyahu and his security and military chiefs are convinced that if the air force starts seriously attacking Hamas’ missile stores and the residences of its leaders, then the rockets will start exploding in Tel Aviv.

At the end of a top-level security assessment of the Gaza crisis, led by the prime minister on Monday it was announced that “operational decisions had been reached” and the security cabinet would resume the discussion on Tuesday. DEBKAfile’s military sources deduced from this comment that no final decision had yet been reached for the IDF to embark on a serious ground operation to cut down the terrorist forces plaguing Israel from the Gaza Strip. It is hard to believe that they are still hesitating after  hundreds of thousands of civilians were hammered by 400 missiles, confined to small shelters with their children, and 50 soldiers escaped harm by a hair.
For a successful large-scale military operation of this kind, two things are essential:

Since all those in authority have been barred from making public statements, it is hard to estimate whether Netanyahu and Chief of Staff Lt. Gen. Gady Eisenkot have finally dropped their insistence on avoiding a major conflict in the Gaza Strip on the grounds that, after it is over, Israel will be back where it started. Countering this argument, critics say: Yes, but Israel will have regained the whip hand and be able to enforce a long period of calm. A former Deputy Chief of Staff, Maj. Gen (res) Yair Golan has dismissed the current Netanyahu-Eisenkot position as “unwillingness to win the battle.”

This unwillingness is challenged by a determined opponent. Yahya Sinwar is Hamas’ one-man decision-maker. It is he who runs the war on Israel. So long as he sees Israeli planes attacking empty buildings in the Gaza Strip, he will continue to turn the screw on the Netanyahu government for more concessions and a steady supply of cash and fuel against empty promises of calm. This strategy works perfectly. Last week, Qatar delivered $15m in cash to Hamas in the Gaza Strip and Israel began running convoys of fuel tankers into Gaza. And yet, on Friday, Hamas staged its regular mob assaults on the Israeli troops defending the Gaza-Israeli border fence and unleashed this incredible rocket barrage.

This situation is untenable. It can only be altered if the IDF changes its tactics and goes for targets of military value and hits Hamas armed wing’s actual locations without prior warning. If Israel is ready for a real showdown with Hamas on those lines, it has a good chance of winning the current round with the Palestinian terrorists, regaining its deterrence and achieving a lengthy period of calm for the battered population of the south.

117 thoughts on “Will Israel do what it takes to degrade Hamas after 400 rockets?”