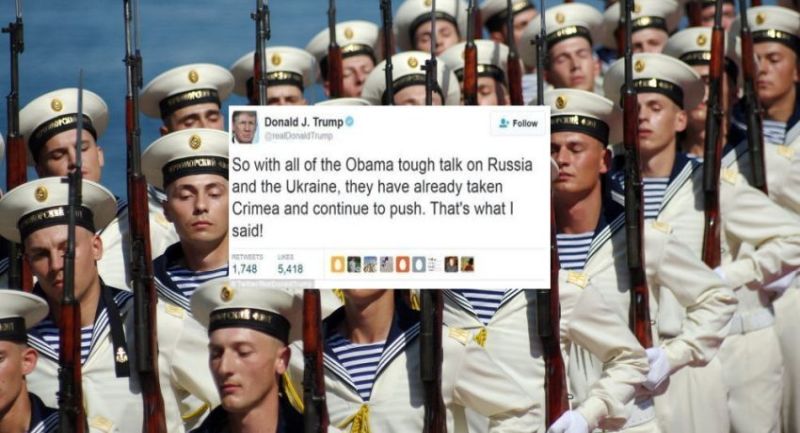 Crimea hung heavily over the NATO summit in Brussels this week (July11-12) with speculation rife about US President Donald Trump’s intention when he meets Vladimir Putin in Helsinki on July 16. At a news conference after the NATO summit, Trump did not confirm or deny rumors about plans to recognize Russian annexation of the peninsula, He stressed that he had no part in the annexation process, including a new port and a bridge link. It occurred during the Obama presidency and the US did not interfere, he pointed out. As to the coming summit with Putin, he said, “There is no agenda, but I think it will go well,” Trump added: “He is not an enemy, or a friend. I would call him a competitor. He acts for Russia and I for the US and we’ll see what happens.”

The rumors stemmed from a comment attributed to the US president at the G7 summit in Quebec last month, when he is quoted as saying: “Crimea is Russian because everyone who lives there speaks Russian.” This was never confirmed, but he did suggest to reporters on board Air Force One on June 29 that he may consider recognizing Russia’s claim to Crimea.

Challenged to clarify her boss’s comments, the White House spokeswoman Sarah Sanders told a press briefing on July 3: “We do not recognize Russia’s attempt to annex Crimea. We agree to disagree and the sanctions against Russia remain in place until Russian returns the peninsula to Ukraine.”

In Kiev, a Ukrainian official likened Trump’s purported acceptance of Crimea’s annexation to “the infamous 1939 nonaggression pact between Adolf Hitler’s Germany and Josef Stalin’s Soviet Union.” Tossing another match on the fire, the US President commented that the government of fellow NATO ally Angela Merkel was “totally controlled” and “captive to Russia,” due to the joint natural gas pipeline between Berlin and Moscow.

All the rumors hanging over the Crimea issue connect Trump’s pointedly opaque intentions on the Crimean issue to his strategy for procuring Putin’s backing for his campaigns against the nuclear and missile programs of Iran and North Korea. The rationale of this strategy would be a tradeoff: The US president would remove the Crimean annexation from the international agenda and consign it to the history books, provided that the Russian president took over from China’s Xi Jinping as mediator for getting negotiations rolling again between the Trump administration and Kim Jong un. (See separate article.)

That proposal sprang wings on Thursday, when the Russian embassy in Pongyang announced that Ri Ryong Nam, North Korea’s Vice Premier and President of the DPRK Football Association, had been invited to attend the closing ceremony of the 2018 FIFA World Cup in Moscow on July 15. The Russian president would thus have a chance of obtaining the Kim regime’s consent to his role as go-between the day before the Trump-Putin summit.

As for Iran, there are stubborn rumors that Trump will meet Putin halfway on the Crimean dispute and may even ease some of the sanctions imposed on Russia (for which he would need congressional approval) – if the Russian president acted as middleman between Washington and Tehran to achieve two objectives: rewriting the 2015 nuclear deal and removing Iranian forces from Syria.

On July 12, shortly after Prime Minister Binyamin Netanyahu flew out of Moscow after his talks with Putin, the Russian president sat down in the Kremlin with Ali Akbar Velayati, international affairs adviser to Iran’s supreme ruler, Ayatollah Ali Khamenei.

How that conversation went may be eventually be revealed but only after the Helsinki summit.