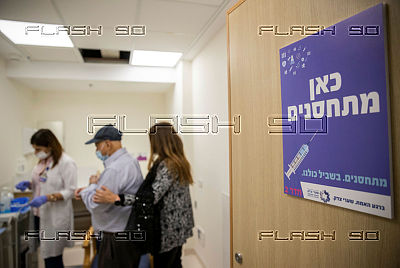 On the day that a total of 1,224,000 Israelis were vaccinated against coronavirus, on Monday, Jan 4, infection jumped by another 5,135 new cases to 6..6pc out of 79,000 tests. Health experts said infection was “running amok” with 69 deaths in the first three days of 2021, serious cases doubled in 10 days and a new mutant strain already present.  A strict all-embracing closure can no longer be delayed, they said. Israel’s third “lockdown” was a washout. Unlike the first two lockdowns, schools and businesses were allowed to stay open, with the result that people threw off all restraints on shopping and crowding.

Health Minister Yuli Edelstein is to bring a strict lockdown format before the coronavirus cabinet scheduled to convene on Monday afternoon or Tuesday. Backed by PM Binyamin Netanyahu, he warns: “Anything that remains open [including schools] threatens the closure. He advised a short, comprehensive lockdown of two weeks now – otherwise, he warned, further down the road, it will not take weeks to bring the rampaging pandemic under control, but months of agonizing shutdowns.

However, Defense Minister Benny Gantz said on Tuesday that he would stand fast against closing schools when this demand comes to the vote in the cabinet. His Kahol Lavan party is being whittled down by defections and sinking polls (from 17 to 7), and so Gantz stands by a face-saving demand to strike a balance between education, health concerns and the collapsing economy.  Like him, the opposition parties are also forming up against a strict lockdown. Although most antigovernment lawmakers admit privately that they appreciate the urgency of a strict lockdown, but would be “unpopular” and prejudice their chances in the March election now underway.

The prime minister created a moment of farce when he arrived at the Israeli Arab down of Umm al-Fahm to witness on camera the world record of Israel’s millionth vaccine. Unknown to Netanyahu, the recipient turned out to be an ex-convict who had served time for murder. Quick to exploit the occasion, the ex-con said he would definitely vote Likud.
Netanyahu, who has been cultivating Arab politicians for the first time in any of his election campaigns, announced on Monday that he intended to reserve two places on the Likud slate for Arab lawmakers.

The last lap of the virus pandemic’s visitation of Israel, before vaccinations take effect, is therefore beset by an election battle among politicians desperate for campaign fodder, while a swarm of dying and mushrooming political groups playing football with a deadly virus.

The heroic medical vaccination effort, topping an average 150,000 coronavirus vaccine shots a day, is meanwhile running out of steam. The sick funds in charge of the drive report that their stocks are down to 170,000 doses. The health authorities say that fresh supplies are due in February. Meanwhile, from next Saturday night, only the second doses set aside for the high-risk and elderly groups who were injected with the first shots, will be administered.

Israeli officials are in the middle of a hectic lobbying effort to persuade the Pfizer and Moderna pharmaceutical firms to provide the millions of vaccines required to finish inoculating the top-priority groups and turn to the general public.

The Health Ministry strongly objects to a proposal making the rounds to administer just one shot of the covid vaccine for partial protection against the virus and forego the second, in order to eke out shrinking supplies and vaccinate a wider circle of recipients.

According to Pfizer’s official trial results, one dose of the vaccine provides only 52% protection against coronavirus over a period of 10 days to three weeks. Partial public immunity could also bolster selective evolutionary pressures on the virus that would lead to the emergence of new variants capable of bypassing the vaccine.

The minister of health rejected this proposal as “half a job” and promised all the second jabs would be delivered and the job completed in full.