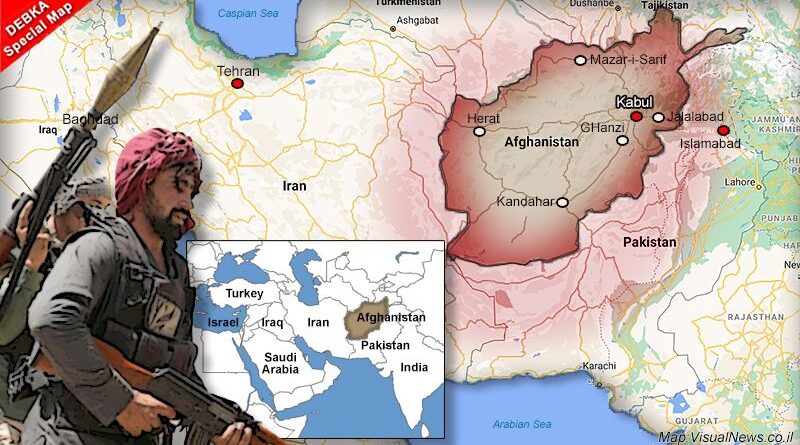 Taliban soldiers were photographed around desks at the presidential palace in Kabul on Monday, Aug.16, hours after President Ashraf Ghani fled the country. The US, still in control of the airport, rushed to evacuate remaining personnel and local associates from the country. Taliban officials told Reuters they plan “a swift transition of power with an interim government as a buffer.” Spokesman Suhail Shaheed said they are seeking “unconditional surrender.”

A few minutes after entering the outskirts of Kabul on Sunday, Aug. 15, Taliban spokesman Suhail Shaheed said his forces await a “peaceful transfer of the city.” Afghan president Ashraf Ghani is in emergency talks with US Special Representative for Afghanistan Reconciliation Zalmay Khalilzad as US staff exit the embassy by helicopter. The Taliban statement said they have “no plans to take the city by force” and no intention of “taking revenge” against those serving in the Afghan government or military.

Thousands of troops from the US and Britain are flying in to secure the airport which is now the only route out of the country with the Taliban now holding all the country’s border crossings. On Sunday, the Taliban took the eastern city of Jalalabad without a fight and secured the main highway to Kabul.

DEBKAfile reported on Saturday in a special analysis:

The Taliban’s stunning blitz in Afghanistan bodes a shift in the balance of power on the Indian subcontinent and the revival the terrorist threat to the Mid-East. The return of Taliban to Kabul and the inevitable reinstatement of al Qaeda and possibly Islamic State terrorists in their old lairs, is imminently a revived treat to the Arab and Muslim world, a danger to Iran, and an open door to Turkish intervention. Israel’s security would be imperiled together with the stability of the regional partnerships forged under the Abraham accords.

Taliban’s lightning capture of four provincial capitals and 18 towns dashed the Biden administration’s hopes of Taliban and Afghan president Ashraf Ghani reaching an accommodation after the US troop withdrawal from the country, and placed its forces within reach of Kabul, the capital. The Pentagon said on Saturday, Aug. 14, that most of the 3,000 more troops, ordered to Kabul by President Joe Biden to speed the safe evacuation of troops and the US embassy, would be in place on Sunday. They would aid the first US Marine Corps battalion which had just landed to move thousands of evacuees per day out of Afghanistan. In addition to the Marines, another 4,500 to 5,000 were being sent to bases in the Persian Gulf, with 1,000 heading to Kuwait to speed up visa processing for Afghan translators, their families and others who fear retribution for aiding the US during its nearly 20-year occupation following the Sept. 11 terror attacks. The urgency came after the 300,000-strong Special Forces of the Afghan Army, which the US had trained and armed for 20 years at a cost of some $88 bn, folded in one place after another. The surrender of Kandahar and Herat, the largest cities after Kabul, handed more than two-thirds of the country including the south to Taliban forces, although they numbered one third of the government army. Ironically, it was Taliban which obeyed President Joe Biden’s exhortation: “They have got to fight for themselves, fight for their nation.”

Mazar-e-Sharif, a traditional anti-Taliban stronghold in the north, is still holding out, while surrounded by the Taliban. Kabul, a town of 4 million, appears increasingly to be a write-off for the Ashraf government.

Largely unnoticed by the Western media, Taliban this week seized, along with territory, large number of advanced US ScanEagle intelligence-gathering .in the battle for Konduz.

DEBKAfile’s anti-terror sources share Western intelligence assessments that Taliban’s leaders, as soon as they are safely in the saddle in Kabul, will lose no time in turning the clock back to the days before Al Qaeda’s 9/11 atrocity triggered the US invasion of Afghanstan. Those terrorists as well as the Islamic State can expect to recover their command centers and training facilities ready to launch their next onslaught. Early sightings find Al Qaeda setting up shop in the 15 provincial towns already under Taliban control.

From the broader perspective, Iran, which claims leadership of the Muslim Shiah world, a Taliban victory in Kabul would represent the return of a hateful menace to its back door. Their common a 950-km long border, running through forbidding, rugged terrain, can’t be impenetrably sealed and has long enabled Taliban to smuggle to the West 85pc of the world’s opium and heroin from crops grown in Afghanistan, as well as offering the Afghan terrorists a major illicit conduit to Europe.

This b order also offers an escape route for Afghan’s minority groups, such as Tajiks and Hazaras, in flight from persecution. Around a million of these ethnic Afghans have taken refuge in Iran, adding a heavy burden to Tehran’s already shaky economy.
The opportunistic Turkish president Recep Tayyip Erdoğan is closely watching the battle for Kabul, ready to whip out a proposition for a winning Taliban to let a mixed Turkish-Pakistani unit take control of the big international Bagram airfield outside Kabul. Turkish defense minister Hulusi Akar visited Islamabad on Wednesday, August 11, to sell the idea to Pakistan Prime Minister Imran Khan. Erdogan would be following up on the Turkish troop presence he has already wangled in the flashpoint areas of Libya and Syria as well gaining as a military base in Qatar. A Turkish base in Afghanistan, boosting a resurrected Taliban administration that plays host to a resurgent ISIS and Al Qaeda, would spell the rise of an anti-Israel axis pitted strongly against the Abraham Accords bloc.