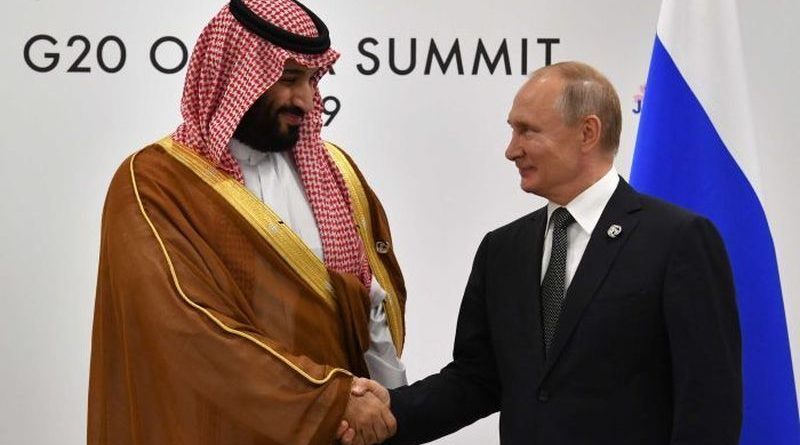 The world may be flooded in the coming weeks with hundreds of thousands of barrels of cheap oil due to the next round of the oil price war raging between Saudi Arabia and Russia.

Last week, the Saudis asked members and non-members of the OPEC oil producers cartel to cut oil production by 1.5 million barrels per day, for the sake of stabilizing prices and checking their fall as a result of the global havoc caused by the spreading coronavirus. Russia refused. This galvanized Saudi Crown Prince Mohammed bin Salman (MbS) into declaring a slash in the price of Saudi crude, coupled with a major boost in daily production from 9 million bpd to 11 million bpd in March.

Global prices reacted by going into freefall on Monday, March 9. If they continue to disagree on production limits by March 31, all OPEC members will be free to ignore production restrictions from April. The Saudi move cut deep into the demand for oil, further escalating the Saudi price war with Russia. If Aramco goes ahead with its plan to increase production up to 12.3 mb/d, output will exceed the company’s maximum sustained capacity by 300,000 barrels per day.

Moscow responded that it can live with prices of $25-$30 per barrel, but the Saudis have budgetary pressure and a fixed exchange rate and so will be forced to dip into their cash reserves if the contest between them spirals further. Oil experts estimate that the Saudi budget could withstand prices dropping to $12-$20k per barrel, but Riyadh appears to be looking at an even more extreme scenario of oil sinking below $10 the barrel.

In the background of the Saudi-Russian oil price war is the American fracking industry which has made the US energy independent and the world’s largest oil producer. Both Saudi Arabia and Russia are eager to derail this achievement albeit not out of the same interests.

For Russia, falling world prices would blow back on the US, forcing it to reduce the number of its rigs, its spending and its active completion crews. Nearly all shale wells would stop making money. Vladimir Putin would see this as fitting punishment for the sanctions the US administration has imposed on the Russian economy and Moscow’s allies, such as Venezuela. President Donald Trump’s ban on European air travel linked to coronavirus will also contribute to falling oil prices.

The Saudi Crown Prince’s motive in embarking on the price war is harder to fathom on grounds of hard interest. Impulsive in nature, he may have hit back at Putin for his refusal to play ball, before counting the consequences. At any rate the effect on the world economy will be dramatic. Cheap crude will put the costly production of oil and gas on the spot in the Middle East, including the Gulf emirates, Iran, Iraq, Algeria and Libya, as well as Latin America and Africa. Both Russia and Saudi Arabia may also pay a price in terms of their world influence.