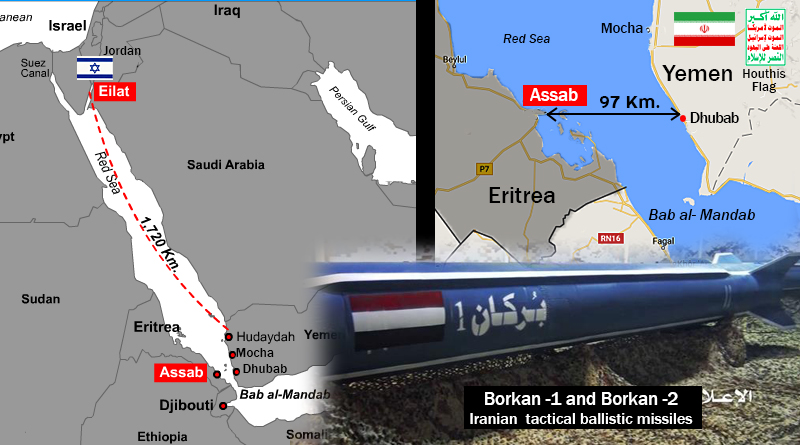 Israel heard a new threat this week from an entirely new quarter, Yemen’s rebel Houthis. Their military spokesman, Col, Aziz Rashid, said Sunday, Oct. 1, in reference to Israeli bases in Eritrea: “Israel’s military bases in Africa are within range of Houthi missiles,” adding, if necessary, “Our forces would soon have missiles capable of reaching Israel itself.”

He did not need to spell out where those missiles come from. It is no secret that the Houthis are amply armed and supplied with intermediate range ballistic missiles from a single source, their sponsor, Iran.

Interestingly, the spokesman mentioned missiles able to cover the 1,720km distance between northern Yemen and the Israeli port of Eilat. However, according to DEBKAfile’s military sources, the Yemeni insurgents don’t have missiles with that sort of range. Tehran has given them Borkan-1 and Borkan-2 tactical ballistic missiles, whose ranges are respectively 800km and 1,400km. Both are short of the distance to Israel.
In the past year, the Houthis fired a number of missiles into neighboring Saudi Arabia, leader of the coalition fighting their insurgency. Some were aimed at the capital Riyadh. Two fell short near the Yemeni border and one hit a military target outside the Saudi capital. But most of the others were either intercepted by Saudi anti-missile defenses or exploded on open ground far wide of target.
While Israel has no reason to fear an Iranian missile attack on its soil by Yemeni insurgents as yet,  its Red Sea shipping is definitely vulnerable to the P-20 (Chinese Silkworm) shore-to-ship weapon, a kind of cruise missile, which the Houthis have available for shooting at the Israeli war fleet and merchant vessels sailing in the Red Sea to and from the Gulf of Aqaba.
Exactly a year ago, a Houthi missile struck a United Arab Emirate warship and set it on fire. Ten days later, on Oct. 10, they launched missiles against the USS Mason destroyer and drew an American retaliatory blow to their missile batteries.

More recently, on September 14, the Houthi leader, Abdulmalek Badruddin Al-Houthi, declared that the UAE is within his forces’ missile range. He noted that he spoke from experience after a successful test launch at the oil emirates, which is 1,500km away. He did not say when the test took place or which missiles were fired. But he went on to boast that his army possessed drones capable of cruising through Saudi air space.
The Houthi spokesman’s threat Sunday of a missile attack on Israel was the second time in a month that the Yemeni insurgents had referred to new Iranian long-range missiles for attacking a nation accused of siding with Saudi Arabia.

They claim Israel has become involved in the Yemen war by providing the Saudis with intelligence from its reconnaissance fleet which is based at the Eritrean port of Assab just 97km across the sea from the Yemeni coast.
Israel has never acknowledged those bases, but foreign sources began reporting in 2012 the discovery of Israeli war ships and submarines in permanent berths at Assab port, as well as an early warning station built there.