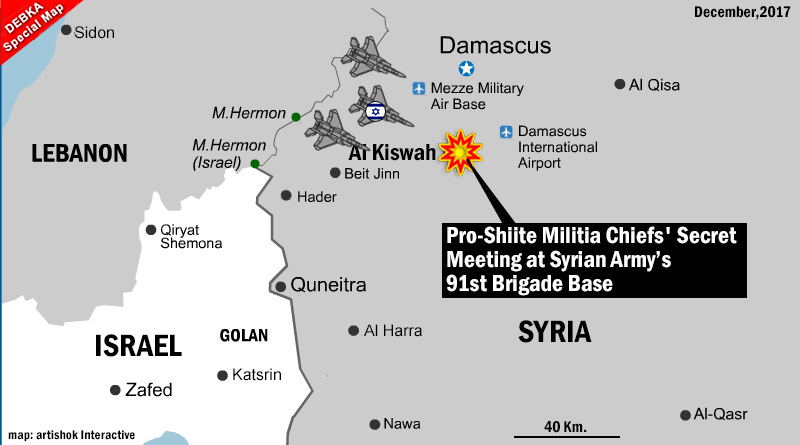 An Israeli air raid early Saturday, Dec. 2 struck a group of pro-Iranian Shiite militia chiefs holding a secret conference at the Syrian Army’s 91st Brigade base near Kiswah. Iranian and Hizballah officers are reported among the casualties. This is reported by DEBKAfile’s exclusive sources.
The base itself lies 14km southwest of Damascus and around 50km from the Golan. Gathered there were all the militia commanders operating in southern Syria to receive their orders in advance of a major offensive to capture rebel pockets in the Quneitra region opposite Israel’s Golan positions. They were taking briefings from their Iranian Revolutionary Guards commanders and Hizballah officers, when the Israeli Air Force dropped missiles on the Syrian 91st Brigade building, where the conference was taking place. The time choses for the conference was Saturday morning for maximum security.
No information is available on the number of casualties, but they are estimated to include numbers of dead and wounded.
DEBKAfile’s military sources note that this was the first direct Israeli attack on the pro-Iranian militias enlisted by Tehran from Iraq, Afghanistan and Pakistan to fight for the Assad regime under the command of Revolutionary Guards Al Qods chief Gen. Qassem Soleimani. The Iranian general has recently set up a war room in Iraq near the Syrian border. For more than a week, Hizballah and the foreign militias have been massing troops in southern Syria ready for an assault on Al-Harra, which is 8km from the Israeli Golan. This tiny town’s strategic importance is disproportionate to its size. Al Harra is meant to be the jumping-off point for the offensive to drive from the east against rebel pockets around Quenitra and along the Israeli border.  Any force holding this town controls the Syrian-Israeli-Jordanian border triangle.

Prime Minister in a special message reiterated Saturday night: “May I repeat that we will not let any regime bent on destroying Israel procure nuclear arms. Neither will we allow the Iranian regime to establish itself militarily in Syria, as it is planning, because its sole objective is to destroy our country.”