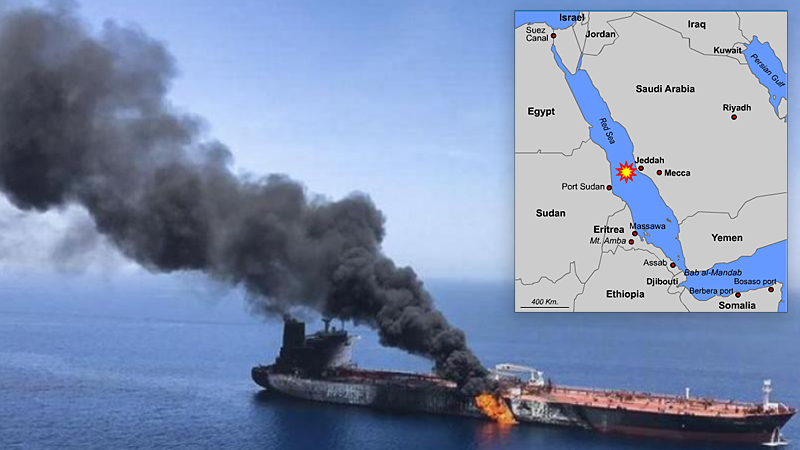 Two missile explosions, 20 minutes apart, set a tanker belonging to the National Iranian Oil Company on fire in the Red Sea on Friday, Oct. 11, 95km from the Saudi port city of Jeddah. Iranian state media IRNA said the explosions damaged two storerooms aboard the oil tanker and caused an oil spill into the Red Sea.

Iran’s Nour news agency, close to Iran’s Revolutionary Guards, later said the situation was under control and no crew members were injured. It gave the the vessel different names, “Sanitized” or “Sabity” or “Sinopa”

The US Navy’s 5th Fleet, which oversees the region, did not immediately respond to a request for comment.

The explosions came after a series of attacks attributed to Iran, including the shooting down of a US drone over the Strait of Hormuz, attacks on tankers sailing in the Gulf and, finally, the cruise missile-drone assault on Saudi oil facilities which halved its output.

DEBKAfile: If a missile strikes is confirmed. this would be the first time since that series of attacks began to unfold five months ago that an Iranian oil tanker was targeted.

The incident may have two possible sources:

If the Saudis were responsible, the incident is capable of triggering a major outbreak of hostilities, including the trading of missile strikes between the oil kingdom and Iran. If it was a third party, Tehran may decide to pin the blame on Israel. On Thursday, Oct. 10, Prime Minister Binyamin Netanyahu revealed for the first time that Israel was pondering a pre-emptive attack on Iran to thwart its plans for an assault on Israel.