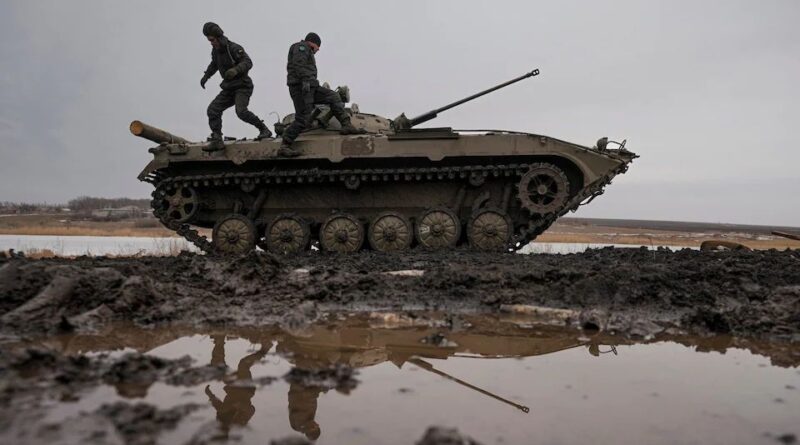 The US and Russian presidents will talk at 11 a.m. ET Saturday, Feb. 12, after President Joe Biden warned US allies that he believes Vladimir Putin has decided to invade Ukraine. US National security adviser Jake Sullivan spoke of the attack as imminent, adding that the Russians would first attack Ukraine “with aerial bombings and missiles, followed by a ground invasion involving the onslaught of massive force.”

American, Israeli, European, Japanese and other foreign civilians civilians have been advised to leave Kyev without delay and diplomatic families are being evacuated.

US military preparations continued apace while the Russians continued their buildup on the Ukraine border. Defense Secretary Lloyd Austin Friday night ordered 3,000 more soldiers from the 82nd Airborne Division to deploy in Poland, joining the 1700 already there. A US armored column crossed from Germany to the Kogalniceau Base in the southern Romanian region of Constanta. Four B-52 long-range heavy bombers landed in the UK on Friday ready for action in the event of a Ukraine escalation.

While some NATO sources speculated that the Russian leader would hold off until the ongoing Beijing Olympics ends on Feb. 20, US Secretary of State Antony Blinken reported “troubling signs of new forces arriving at the Ukraine border and warned that an invasion could begin at any time – even during the ongoing Olympic games.”

By week’s end, 130,000 Russian troops were massed on the Ukraine border, a large-scale military drill took place in Belarus and Russian naval and air forces were conducting war games in the Black Sea opposite the Ukraine city of Odessa.

A key element in Russia’s military timing for an invasion of Ukraine, say DEBKAfile’s military analysts, is the state of the ground. East Ukraine is covered in thick winter mud which is unlikely to start drying out before late February early March. Russian generals will not have forgotten the lesson of WWII when a German tank invasion of Russia was bogged down in mud and defeated.

French President Emmanuel Macron’s bid to persuade Putin to hold back from Ukraine was dominated by a comically long table that separated the two leaders, after Macron refused to take a Russian Covid-19 test before they met, for fear that the Russians would “get hold” of his DNA.

UK foreign secretary Liz Truss fared no better than the French President in her attempt at diplomacy. Russian Foreign Minister Sergei Lavrov said that the meeting they held was between “the deaf and the dumb.”

The Russian Ministry of Foreign Affairs Friday once again accused Western countries and the media of spreading a “large-scale disinformation campaign,” which promoted the thesis about an “allegedly impending Russian invasion of Ukraine.”