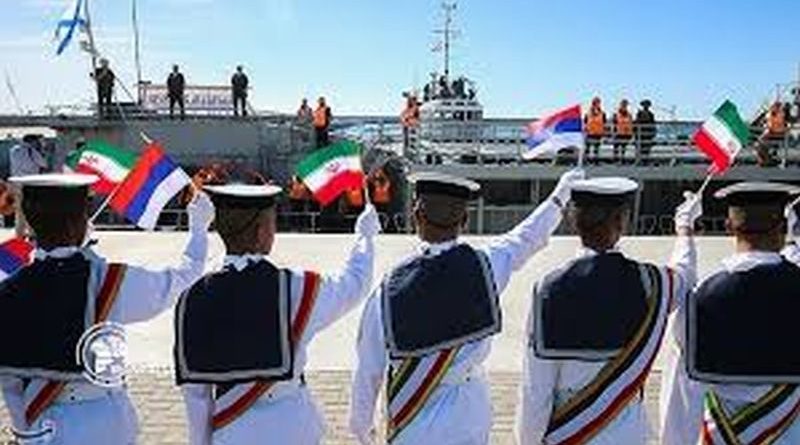 With high bombast, Iran kicked off its first naval exercise with China and Russia – notably in the northern part of the Indian Ocean and outside the Persian Gulf. The joint exercise, codenamed “Marine Security Belt,” was launched on Dec. 27 from Chabahar port in the Sistan-Baluchistan Province on Iran’s southeastern coast. The four-day exercise, of strategic importance for regional maritime transit traffic to Afghanistan and Central Asia, came at another moment of spiraling tension between Iran and the United States.

Yet Iran’s Revolutionary Guards Navy chief, Rear Admiral Gholamreza Tahani, hailed the drill for projecting a message of “peace. friendship and lasting security through cooperation and unity.” But he also emphasized that it proved “Iran cannot be isolated.”

DEBKA Weekly’s military sources note that the three naval forces share a common bid to challenge the US as the world’s undisputed military power by establishing an alternative security mechanism of international coalitions without America.

Iran’s Army Chief of Staff Rear Adm. Habibollah Sayyari said the Iranian-Russian-Chinese drills demonstrated that there is no need for any “illegitimate” foreign maritime security mission in the Persian Gulf. “Demonstrating Iran’s maritime authority in the northern Indian Ocean and sharing its experience with other nations is one of the goals of the exercise,” he said.

Sayyari boasted that Iran’s navy had successfully transformed itself “from a coastal force to a strategic navy” which was why “powers like China and Russia were coming to the region’s waters for military drills.”

In launching their naval exercise from Chabahar port, none of the participants referred to the port’s ambivalent situation. Although it is the seat of the IRGC’s naval headquarters, the United States has established a welcome financial presence in that port in its commercial capacity as India’s only outlet to the Arabian Sea.

On Dec. 27, the Trump administration gave India a written assurance to facilitate funding from global banks for the purchase of $85 million of equipment for Chabahar Port. “We have to procure equipment for running the port,” an Indian government official said, “but are prevented from doing so by US sanctions.” In November 2018, Washington granted this Iranian port a waiver from the sanctions imposed on the regime in Tehran. Still, an Indian official complained, “When we hit the international banking system, as soon as they hear the word Iran, they are afraid to stick their necks out. ” Washington is helping India obtain global financing for developing Iranian Chabahar, because otherwise Pakistan or China would be glad to step into the breach.