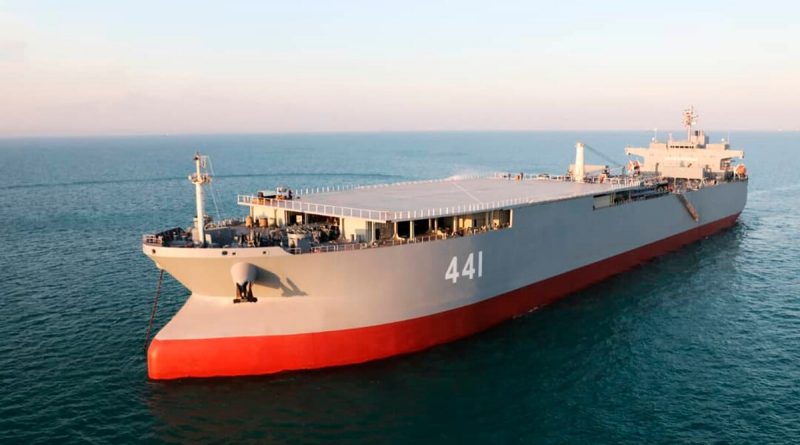 The Iranian navy’s largest warship Makran, a logistics vessel which carries 7 helicopters, and the missile carrier Zereh have been posted to its fleet in the northern Indian Ocean, the Bab-el-Mandeb Strait and the Red Sea, the Tasnim news agency reports. The two new warships were unveiled and delivered during a two-day Iranian exercise in the Gulf of Oman.

“We are once again in the Red Sea region,” said Maj. Gen. Mohammad Hossein Bagher reporting on the ongoing buildup of warships on Wednesday. State TV said the 121,000-metric ton Makran is Iran’s largest military ship at 228 meters (748 feet) long, 42 meters (138 feet) wide and 21.5 meters (70 feet) tall. It is claimed to support combat ships in the fleet, can travel for nearly three years without docking and carry information collection and processing gear. These features are not independently confirmed. Video footage released by the military showed helicopters carrying commandos to the Makran as part of the exercise.

Newsweek this week ran images of advanced Iranian Shahed-136 “suicide drones” deployed to Houthi-controlled northern Yemen. They are estimated to have an effective range of 2,000 to 2,200 km. Israel, Saudi Arabia and US bases are well within range.

Israel military sources say the IDF has identified the peril posed by Iran’s “second circle” of aggression in Yemen and Iraq. The IDF has been conducting war games since December simulating attacks from the south from a variety of hardware, whether by missiles, drones or other remote guidance weapons. Patriot and Iron Dome anti-missile batteries have been moved to its southernmost town, the Red Sea port city and resort of Eilat.

Its backing for the Yemeni Houthi insurgency has won Iran a strategic foothold against Israel and Saudi Arabia, over and above Iraq, Syria and Lebanon. Its naval buildup puts Tehran in position to blockade this vital sea lane.

Iran routinely uses Yemen’s Houthis for cross-border missile and drone attacks on Saudi Arabia. Its current naval buildup will threaten the kingdom’s Red Sea coastline and western oil route as well. Iran’s use of its “second circle” of aggression against American allies in the region is one more item for the incoming Joe Biden presidency to tackle in any renewed nuclear negotiations with the Islamic Republic.