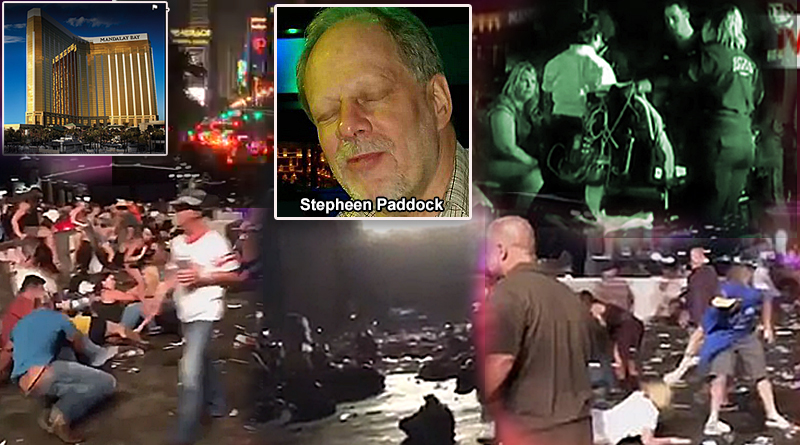 Police found 23 guns in the Mandalay Bay hotel room from which Stephen Paddock fatally shot 59 people and injured 515 Sunday night. Another 19 guns were found at his home in Mesquita, Nevada. This was disclosed  in the latest update on the event by the Las Vegas Assistant Sheriff Todd R. Fasulo early Tuesday, Oct. 3.

Among the loaded guns and ammunition found in his hotel room were high-powered rifles capable of penetrating police armor, as well as hand guns. The toll of tragedies would have been higher had Paddock lived long enough to use his entire arsenal.
The Islamic State has meanwhile reinforced its earlier claim of responsibility for the atrocity with another communiqué, which named Stephen Paddock “Abu Abdul Bar Al-Amrekini” and said he had carried out surveillance of the concert arena opposite the hotel before opening fire on the crowd.
The first ISIS notice claimed that he had converted to Islam some months earlier. While an official US spokesman stressed there was no indication at this time of Paddock’s affiliation to any international terrorist organization, overnight Monday various Middle East sources said he had been in contact with certain quarters in the region, and claimed the FBI had photos recording his visits. No specific country was named in these reports.

The Islamic State’s media outlet has just claimed that Stephen Paddock murdered 50 people and injured more than 400 as one of its “soldiers.” This is not verified by any other source.
Until a few minutes ago, everyone was asking what diabolical impulse drove Stephen Paddock, an American aged 64 from Mesquite, Nevada perpetrate one of the most horrific and pointless shooting atrocities in American history?  It was planned well in advance down to the last detail. The picture pieced together by police and FBI investigators produced details, but no answers – until the ISIS claim, which remains to be verified.

They knew that planning over a period of time and careful foresight went into the deadly crime.
Three days earlier, Paddock took up residence in a room or suite on the 32nd floor of the Mandalay Bay Resort. Hotel. The windows overlooked the country music concert scheduled for Sunday night with a mass audience of 22,000 including many visitors from out of town. He had therefore given himself enough time to take stock of the scene.

He had collected 10 high-powered long-range automatic rifles in his room, along with a mountain of ammunition, enough to keep on shooting for 20 minutes by alternating the guns. He must have knocked out two windows first.

The performers who were on their last song scrambled and the screaming audience began fleeing in a stampede in all directions. Some were shot, others trampled.
The casualty toll has reached 50 dead and 400 injured, including police officers, but those figures are provisional and may still rise.

He also had two cameras ready to forewarn him when law enforcement officers were closing in. When the SWAT team was near the room, he did not wait to be cornered, but turned a gun on himself.

The Las Vegas Sheriff Joseph Lombardo quickly offered assurances that after the primary suspect was down, there was no further threat, since he was a “lone wolf.” Nonetheless, he took the precaution of shutting down the entire Las Vegas Strip.

How was this multiple killer able to assemble his deadly arsenal in a hotel room undetected by staff or fellow guests? Did he have visitors, or receive phone calls?
High hopes were pinned on his “roommate,” Asian-American Marilou Danley, aged 62, for leads to Paddock’s state of mind and contacts as insights to his motivation. She faces rigorous questioning if and when she returns home from an overseas trip.

The FBI has appealed to members of the audience to come forward with any scraps of information they have obtained, especially photos, videos and messages on social media, hope to find answers by processing this mass of raw data.

President Donald Trump delivered a special message of support to the bereaved and the wounded who suffered from an “act of pure evil.” He thanked the Las Vegas Metropolitan Police Department for their professionalism and the first responders for their selfless actions to save many lives. “We are all joined together in shock and grief.

The president ordered the American flag to be lowered to half mast in morning.