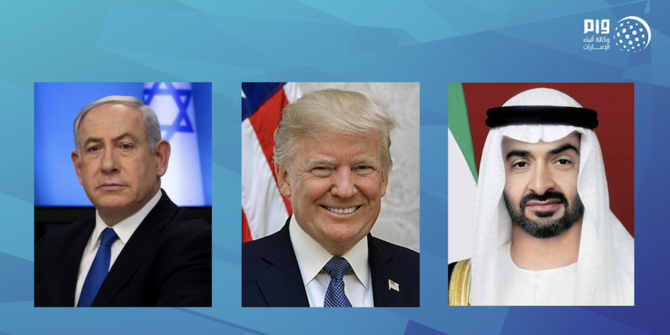 Israel and the United Arab Emirates have agreed to normalize relations, it was announced on Thursday, Aug. 13, in a joint statement by President Donald Trump PM Binyamin Netanyahu and Abu Dhabi Crown Prince Mohammed bin Zayed.

The statement said that the “diplomatic breakthrough” was at “the request of President Trump,” and that Israel will “suspend declaring sovereignty over areas outlined in the President’s Vision for Peace and focus its efforts now on expanding ties with other countries in the Arab and Muslim world.”

Israel and the UAE also said they will continue their efforts to “achieve a just, comprehensive and enduring resolution to the Israeli-Palestinian conflict.”

This was Israel’s third peace accord with an Arab nation, after Egypt in 1979 and Jordan in 1994, and the first with a Gulf Arab government. DEBKAfile: The Netanyahu government has for some years maintained mutually advantageous albeit informal security and economic ties with the UAE and Saudi Arabia. All three share with the Trump administration a common concern over Iran’s belligerent expansionist objectives in the region. Other Arab governments are expected to follow the UAE in normalizing its ties with the Jewish state

PM Netanyahu delivered an address to the nation later Thursday. in which he hailed the accord as ushering in a new era in Israel’s relations with the Arab world and a breakthrough moment for regional peace. He announced that Israeli and UAE leaders and President Trump would soon meet at the White House to sign a formal peace treaty, one based on “peace in return for peace.” Together, they strengthen the US-led front against Iran. Israel and the Emirates have much in common, Netanyahu pointed out, as innovative and forward -looking societies. He concluded with a Salaam aleikum greeting and Shalom.

Pro-settlement leaders in his right-wing bloc expressed outrage over the Likud leader’s consent to suspend his sovereignty plan even for the sake of the historic accord with a key Gulf nation. Netanyahu replied that annexation had not been removed from the table but postponed at the request of President Trump. He recalled that his pledge of sovereignty had always been contingent on on consensus with the White House.

The UAE’s ambassador to the US, Yousef Al Otaiba, a key mover in the negotiations leading to the accord, said in an earlier statement, “It is a significant advance in Arab-Israeli relations that lowers tensions and creates new energy for positive change,” he added.

Delegations from Israel and the UAE are expected to meet in the coming weeks to “sign bilateral agreements regarding investment, tourism, direct flights between Abu Dhabi and Tel Aviv, security, telecommunications, technology, energy, healthcare, culture, the environment, the establishment of reciprocal embassies, and other areas of mutual benefit.  “Opening direct ties between two of the Middle East’s most dynamic societies and advanced economies will transform the region by spurring economic growth, enhancing technological innovation, and forging closer people-to-people relations,” the statement also read.

DEBKAfile adds: One of the most important fields of past cooperation that were touched on very lightly was intelligence. Israel-UAE cooperation in this field has become an important component in the security of the rulers of Abu Dhabi.