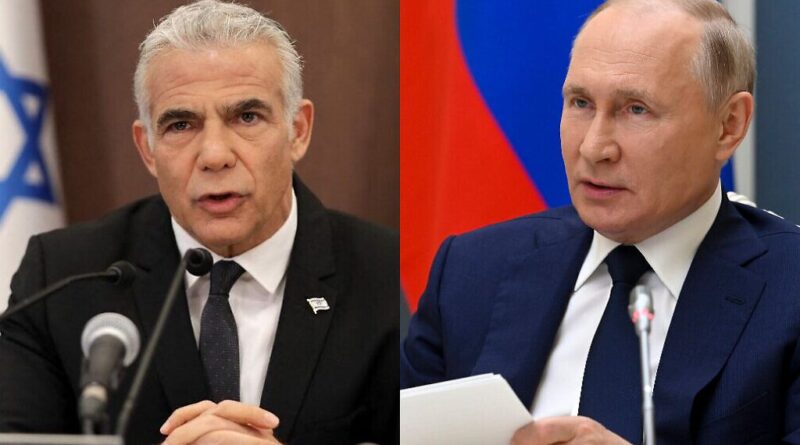 Interim PM Yair Lapid is in hot water with Russian President Vladimir Putin – to the point of jeopardizing Israel’s hitherto well-balanced ties with world powers tended by his predecessors. Lapid, less than a month as caretaker prime minister, is putting his own prospects at risk, just weeks before his Yesh Atid (Future) party fights a general election, by taking a step too far against Moscow to allow for quick repairs.

The acrimony turned serious last week, when a source at the Russian embassy in Tel Aviv leaked word to the media that the Kremlin was taking umbrage at some of Lapid’s most recent opinions and recalling the ambassador was under consideration. The next step was a lawsuit brought by the Russian Justice Ministry against the Jewish Agency, which is responsible for promoting Jewish immigration to Israel, applying for its “dissolution” over unspecified infractions. Unnamed sources in Moscow accused the organization of draining top Russian talents from the country. The case will be heard on 28 July.

On Monday, July 25, Lapid reacted with a warning to Moscow that shutting the offices of the quasi-government Jewish Agency in the country would be “a grave event” with “consequences on the diplomatic ties between Jerusalem and Moscow.”

Lapid decided to put a high-powered delegation together to travel to the Russian capital and explain Israel’s position. The PMO said the delegation would be ready to set out for Moscow as soon as “it receives Russian approval for the talks.” However, the Kremlin, demonstrating it was in no hurry to hear Israel’s point of view, has so far held back from granting the delegate members visas. Since the delegation was to be headed by the National Security Adviser Eyal Hulata, denying a visa would be a major affront to the Israeli government.

Still resounding in the Kremlin is Lapid’s voice as foreign minister condemning Russia for “war crimes” during the invasion of Ukraine. In contrast, the then prime minister Naftali Bennett tried – albeit without success – to use Israel’s friendly ties in Moscow and Kyev to mediate the conflict and visited Putin to this end.

By issuing a reckless “warning” to the Russian leader of “consequences,” Lapid tossed a further irritant into the simmering relationship. His capacity to make good on such warnings is infinitely inferior to that of the Kremlin. Putin could, in a trice, place obstacles in the way of IDF’s steadfast offensive against the Iranian foothold and Hizballah build-up in Syria, turning the security situation on Israel’s northern border on its head. The Russian Jewish community could also be affected by his anger.

Well before any disagreement reached this stage, Lapid’s rival, former prime minister Binyamin Netanyahu, would have been on a plane to Moscow to talk it through face to face.

Saudi Arabia and the United Arab Emirates prudently pick their way between the two world powers, the US and Russia. They were careful not to tip over one way or the other, even on Ukraine, during US President Joe Biden’s visit to the region last week.

Unlike Israel’s Gulf allies, Lapid abandoned that evenhanded option. He was seen in Moscow as overzealous in his greeting for Joe Biden, whose Democrat party’s obdurate anti-Putin stance dates from well before the Ukraine conflict. This crisis is unlikely to disappear before it gets worse. And Lapid may discover that his handling of the discord with Moscow has grown into a prime weapon for beating him as the election campaign heats up.