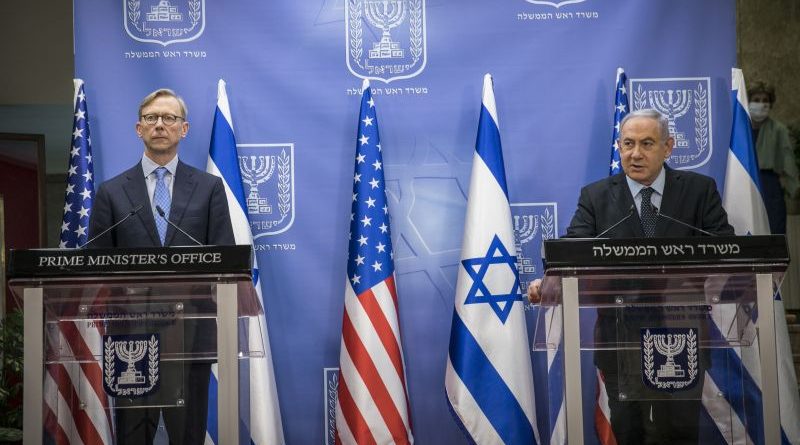 The scale of West Bank annexations that PM Binyamin Netanyahu pledged to announce on July 1 remains up in the air. So does the date. Working with him all week in search of an agreed formula were US President Donald Trump’s emissaries, special envoy Avi Berkowitz and Ambassador David Friedman. They were joined on Tuesday, July 30, by Brian Hook, US Special Representative on Iran and Senior Adviser to the Secretary of State – just back from a mission to Gulf capitals.

DEBKAfile’s political sources reveal. On the table between the American team and the prime minister is essentially a US package deal in partnership with the United Arab Emirates and Saudi Arabia:  Netanyahu would hold off on his decision to extend Israeli sovereignty to 30pc of the West Bank – as set out in the Trump Mid-East Peace Plan. His reward would be a direct meeting with senior Gulf officials – albeit formally, with a non-political agenda, such as cooperation in the fight against coronavirus. Given Hook’s senior rank and influence, the deal no doubt covers wider common areas of interest to all the parties concerned, such as Iran.
Alternate PM Benny Gantz knew that delay was on the cards when he said on Monday, June 29, that the July 1 date was “not holy.” However, he tried explaining this by maintaining that “any issues unrelated to coronavirus must wait.” On Tuesday, he declared: “A million jobless don’t care about annexation.”

Netanyahu, who has taken to snubbing his coalition partner, used a meeting with his Likud faction to shoot back: “The issue is not up to Kahol Lavan [Gantz’s party]. They are not a factor either way. We have a good dialogue going with the American team here in Israel. We are doing this discreetly. When there is something to announce, we will do so.” The PM went on to say: “We are engaged in a complicated process with political and security ramifications. I am not able to disclose details at this time,” he said, adding: “We said it will happen from July 1.” Therefore, “from” that date, but not necessarily “on it.” That is one indicator that Netanyahu is testing other options.

The new package deal brought to Jerusalem by Brian Hook on Tuesday, is one issue to be determined in the 48 hours remaining until July 1. Another arises from the mission Netanyahu assigned to Mossad Director Yossie Cohen who visitedd Amman last week to allay the fears of another US ally, Jordan. Our sources report that Cohen put before King Abdullah the PM’s offer to drop the Jordan Valley from the sovereignty plan for now and limit it to the two or three settlement blocs in Judea and Samaria that were closest to the Green Line border with Israel. Are the blanks in Netanyahu’s annexation plan being filled in? Or will he prefer postponement?

The Palestinians present a major complication. Their latest step is a last-minute offer to go back on their boycott of the Trump peace plan by assigning two relatively unknown Palestinian big-shot tycoons to holding talks with the Trump administration. Palestinian Authority Chairman Mahmoud Abbas’s agents have put out feelers in influential Washington circles in the hope of stirring the interest of Secretary of State Mike Pompeo or the president’s senior adviser Jared Kushner. However, their plan is a non-starter since it is based on a “peace proposal” released on May 30 and posted from Ramallah to the fairly defunct Middle East Quartet. Since it is essentially a copy-and-paste job of the formula used by former Secretary of State John Kerry in his failed peace mediation, it was rejected out of hand in Washington.

Abbas has meanwhile decided to go back on his threat to dissolve the Palestinian Authority against Israel’s annexation and give up on declaring a Palestinian state with a campaign for international recognition. Neither step has resonated where it counts. His mixed messages reflect the disarray, confusion and divisions besetting the Palestinian leadership in Ramallah.  Most critically, his prime minister Mohammad Shtayyeh is openly defiant. After he was instructed by Abbas to stay away from Palestinian political and international affairs and stick to domestic governance, Shtayyeh made arrangements to issue an online policy speech to American audiences on Wednesday, June 31. Abbas has meanwhile withheld the wages of half the PA’s 150,000 security and other staff to stir up popular unrest and undermine his prime minister.

Looming in the background of these last-ditch maneuvers is another date: Nov. 3. Netanyahu is anxious to gain as much annexation momentum as he can so long as Trump is in office. He is gambling on Trump’s re-election for finishing the process. The White house wants the issue settled and out of the way as soon as possible – hence the diplomatic heavyweights moving in on Jerusalem.