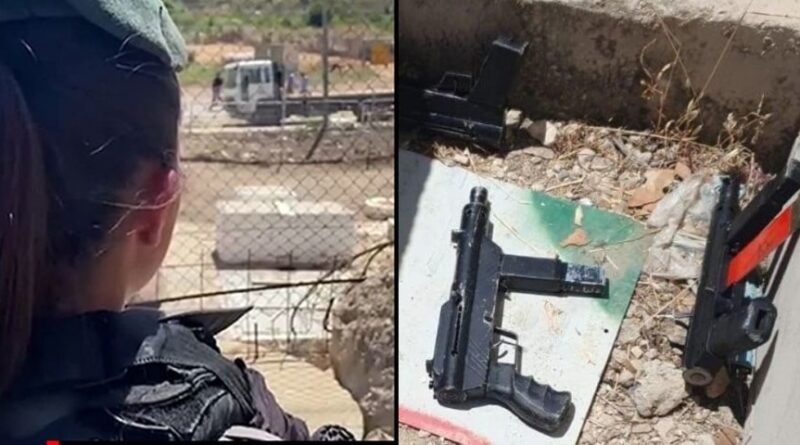 Three armed terrorists had mingled among Palestinian civilians heading for Israel in a bus from the West Bank town of Jenin on Friday, May 7. When the bus halted outside the Salam military base and the passengers stepped out for inspection, the trio jumped forward, pulled out “Carlo” improvised automatic guns and opened fire on the border guard officers,. They were cut down in a flash by return fire from the base gate before anyone was hurt. Two Palestinian gunmen were killed on the spot, a third was injured and removed to hospital.

This terse scenario was filled out later by an on-the-spot investigation. Two of the terrorists were from Tulkarm and the third from a village nearby. They were armed with guns and knives for a large-scale attack in Israel. According to one report, they were heading for Temple Mount in Jerusalem.
They realized the game was up when the bus was stopped. All three then opened fire at once. Staff Sgt S, a 20-year-old female border guard officer, commander of the guard team, shot back after taking cover, joined instantly by the rest of the team. Their aim was rapid and precise.

Maj. Gen. Tamir Yadai, head of the IDF Central Command, who arrived on the scene together with Border Police chief, Superintendent Amir Cohen, said that a major act of terror had been thwarted thanks to the sharp, resolute and professional reaction of the border guard officers. This response, he said, was in keeping with counterterror operations current in recent months to meet high tensions in the wider region.

Staff Sgt. S., who comes from a moshav outside the southern town of Beersheba, has been eighteen months in the Border Guard and graduated from a squad leader’s course before being posted to the Salam base, which also serves as the seat of the military tribunal where terrorist suspects are brought for trial.

Staff Sgt. S and her team are credited with saving the day and preventing a serious act of terror for which the intelligence service had received no advance warning.

The threat of violence is especially high over the current weekend. The last Friday prayers of Ramadan habitually explode into violence. Especially fraught is the last night of the festival which falls on Sunday, May 9 and marks the granting of the Qoran to the Prophet Muhammed. The gates of heaven are believed to open for the faithful to post their wishes.

Next comes Monday, May 10, Jerusalem Day, when Israel celebrates the liberation of its capital and reunification of its two parts. This occasion is traditionally marked by a joyful flag parade through the streets of the Old City. This year, it comes  after weeks of clashes between Palestinians, the Israeli police and Jewish dwellers.