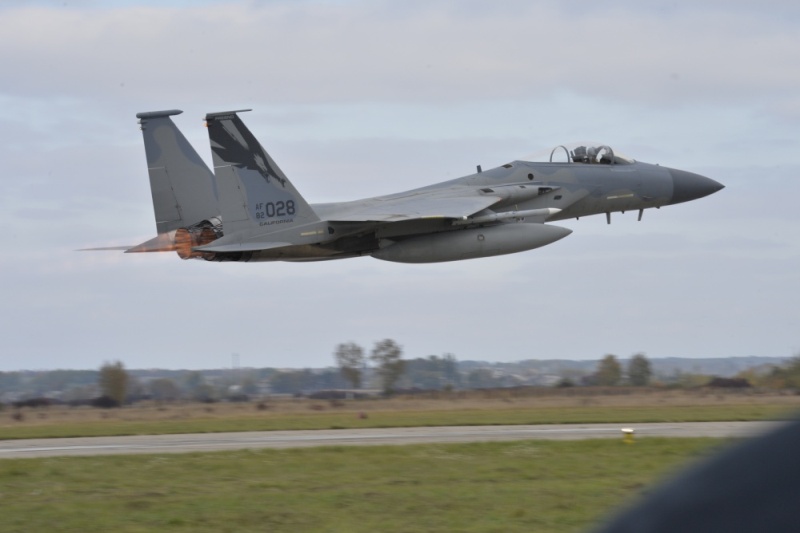 Eight nations officially participated in Operation Clear Sky, the US-led military exercise launched this week from Ukraine’s Starokostiantyniv Air Base. In addition to the US, they were Belgium, Denmark, Estonia, the Netherlands, Poland, Romania and the UK. They were to discover that, unofficially, they had been joined by Israel and the war game’s mission had been switched at the last minute. US and Israeli F-15 jets were practicing missions against the advanced S-300 air defense missiles, which Russia had supplied some years ago to the Ukraine and in recent weeks to Syria.

DEBKA Weekly’s military sources report that Ukraine is armed with six types of Russian air defense systems – three short-range self-propelled Koob 2K12, Tor 9K330 and transported C-125; two medium-range S-300PT transported systems, which are closely related to the mobile, all-purpose, anti-missile and anti-air S-300V1 S-12 Gladiators: and, finally, a long-range S-200V. A similar array is wielded across the lines by Russia’s own forces fighting the Kiev government in eastern Ukraine as well as on the Russian-Ukrainian border of Crimea..

While the types of air defense missiles supplied to Ukraine and Syria are different, the way Russia has deployed them in the two countries is very similar. So Ukraine is a good place for the US and Israeli air forces to test their prowess against those anti-air systems.

The Israeli jets flew into Ukraine from the Mihail Kogalniceanu military facility near the Black Sea town of. Constanza in eastern Romania, home to an American air base. The Israeli Air Force maintains one or two bomber-fighter squadrons at this US base.

Israel’s participation in Operation Clear Sky is thought to have prompted another of Moscow’s hands-off warning in Syrian skies. On Wednesday, Oct. 31, the Russian defense ministry’s Gen. Igor Konashenkov stated: “At this moment, Russian advisors are preparing Syrian military personnel for operating these advanced air defense systems [S-300s].” He then advised “hotheads” to “adequately assess the current situation in the region and refrain from provocative actions on Syrian territory.” This piece of advice closely followed the warning addressed to Israel by his boss Defense Minister Sergei Shoigu after a Russian spy plane was downed opposite the Latakia coast on Sept. 17, when he, too, referred to “hotheads.”

Our military sources have also learned that US and Israeli naval officers have been working with the Ukraine navy in recent weeks to set up a new military base on the Sea of Azov. This shallow water is located between Russia’s Rostov, Krasnodar and Crimean regions, but most of the northern coast belongs to Ukraine.

Several such complex, far-reaching cooperative projects between the US and Israel were worked out during US national security adviser John Bolton’s visit to Jerusalem in the third week of August, from which he proceeded directly to Kiev. President Donald Trump has also placed his Special Envoy for Ukraine, Kurt Volker, in charge of US-Israeli-Ukrainian coordination. Volker was heard remarking in September: ”… wherever gaps in the Ukrainian military’s capabilities exist, the US is prepared to sit down and talk with Ukraine about what their needs are. They can buy things through our foreign military sales.”

It was announced this week that President Petro Poroshenko of Ukraine will pay another visit to Israel as the guest of Prime Minister Binyamin Netanyahu. On Wednesday, Ukrainian First Deputy Prime Minister Stepan Kubiv said that Ukraine and Israel are preparing to sign a free trade agreement this year.

Poroshenko last visited Israel in December 2015, four months after Russia expanded its military presence in Syria. Ties between Kiev and Jerusalem cooled in the interim years in reverse relation to the warming of Israel’s friendly ties with Moscow. That friendship has all but blown away since the loss of the Russian Il-12 spy plane and its subsequent supplies of S-300 air defense systems to Syria. President Vladimir Putin continues to snub the feelers Netanyahu has put out for them to meet and try to mend the fences between them. In response to the cold wind from Moscow, the prime minister is investing in cooperation with Kiev.