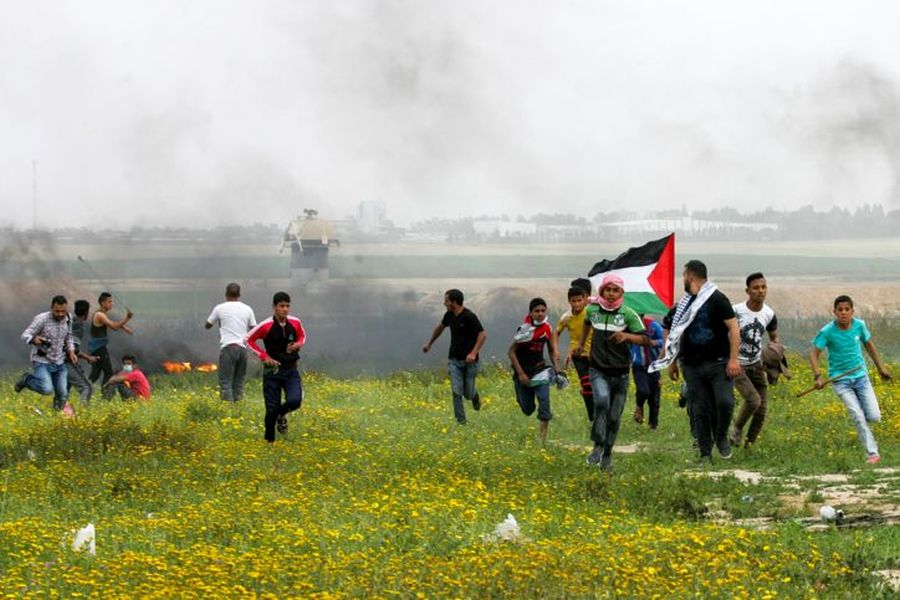 The Hamas directive to Friday’s March of Return protesters – to refrain from violence and stay clear of the border – belies the event’s label. While organizing six tent encampments in the Gaza Strip, parallel to the 69-km Israeli border for a six-week “peaceful protest,” Hamas is sending infiltrators to demonstrate how easy it is to breach the border and enter Israel. This keeps the Palestinian terrorist group’s hand on the lever of a two-track strategy for determining when to use the momentum of the “protest” to send through terrorists for attacks on Israeli communities and Israel border guard posts. Just one such operation would give Hamas an important propaganda victory.
Thursday, March 29, the IDF broadcast warnings to Gazans not to approach the border fence, and used diplomatic channels, mainly through Egypt and the UN, to caution Hamas to hold back any groups from coming close to the border. What exactly was conveyed to the Hamas rulers of Gaza is unknown.
DEBKAfile’s military sources stress that Hamas may find itself losing control of the large crowd of incited Palestinians it is massing against Israel as of Friday, March 30. This crowd may well be penetrated by undercover agents of fellow Islamist terror groups, such as the Islamic Jihad or Salafi sect extremists, some of whom are closely linked with the ISIS Sinai affiliate. They may be hiding among the civilian tent dwellers until their handlers order them to spring out and head for the border, pulling behind them hundreds of young Palestinians inflamed for violence. The Israeli soldiers on guard would then be forced to stop the mass before it surges across for the “return” – first with crowd dispersal measures and then live fire.
DEBKAfile’s intelligence sources report that Hamas posted officers on Wednesday to check the identities of the people reaching the camps and weed out such penetrations. The screening effort is, however, no more foolproof that Israel’s attempts to block the border against infiltrators.
Some high IDF officers have told our sources that they can’t understand why the top brass has not acted to stop Hamas’ preparations for the biggest anti-Israel spectacle it has staged since Israel ended its eight-year long rocket campaign. They ask why Israel is allowing the tent villages to rise 500-700 meters from the border, populated with the help of a fleet of buses which collect them from the mosques. The modern conveniences, food, running water, a new network of pathways and flowering plants give these encampments the aspect of holiday resorts. Hamas is working hard to lure reluctant “protesters” to stay in place for six weeks of unfolding demonstrations.  Those officers ask why Hamas was allowed to lay this infrastructure for an event that could quickly run out of control and turn violent at any moment.

Early Thursday, March 29, saw the fourth infiltration by Hamas operatives from Gaza in less than a week. Two young Palestinians armed with knives and bolt cutters, were arrested after crossing into Israel. Asked why nothing was being done to stop Hamas’s two-track offensive, the IDF spokesman responded: “The army pursues a policy of containment and non-use of gunfire. At times, this policy is not correctly understood by the other side. It is our hope that they understand it to mean self-restraint on their part.”
The IDF high command is evidently hard at work producing language to obscure its decision to refrain from pre-emptive action against a menace that while cunningly nuanced is nonetheless real.

39 thoughts on “Why doesn’t the IDF pre-empt Hamas March of Return?”